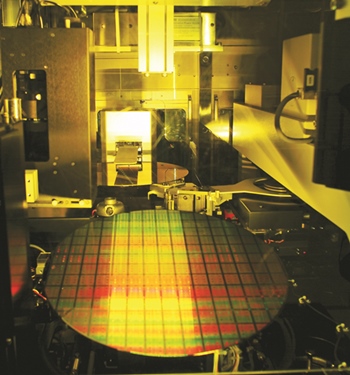 Ultratech, the California-based provider of lithography systems and laser processing equipment used in LED and silicon semiconductor device production, has reported a sharp increase in sales in its latest financial quarter.

For the three months that ended April 1, the San Jose company swung into profit as revenues jumped 27 per cent year-on-year to $57.4 million.

The positive momentum comes shortly before Veeco Instruments is due to complete its planned $815 million acquisition of Ultratech, and continues the company's recovery from a slump that saw its workforce cut by 10 per cent back in 2015.

Last month Ultratech announced that it had received orders for the LSA equipment from a number of foundry companies in China. The tools now feature two laser beams, said to add process flexibility and enable millisecond-scale annealing with minimal thermal transfer.

“Inserting a millisecond anneal step post-junction formation, such as gate stack formation, silicide or post-silicide anneal, has been shown to improve leakage and device reliability, while reducing contact resistance and improving both performance and yield,” explains the firm.

Shortly after that, Ultratech said it had signed another supply deal, this time to provide its “AP300E” lithography stepper system to “several” companies specializing in semiconductor assembly and test activities in Korea, Taiwan, and China.

And just a couple of weeks ago Ultratech added that it had received “multiple commitments” for its new “LM7” laser melt anneal system. This tool, introduced late last year, is set to ship to two different semiconductor firms in North America, for use in the very latest logic device production nodes (the so-called “7 nm” node).

Dual laser
Similar to the laser spike annealing system, the LM7 is also based on two laser sources, but provides annealing on a much shorter, nanosecond scale – meaning far less heat is transferred.

Yun Wang, Ultratech’s chief technologist for laser processing, explained: “As we continue to scale to smaller nodes, contact resistance is widely acknowledged to be one of the gating issues that must be addressed.

“Ultratech's laser melt anneal technology addresses emerging annealing requirements for 7 nm and beyond, with applications spanning the front end where the focus is on device performance and leakage improvement, the middle-of-line for contact resistance, and at the back-end-of-line where the focus is on material modifications and reduction of resistive capacitive (RC) delay.

The positive quarter saw Ultratech swing to a net profit of $3 million, compared with the net loss of $1.15 million posted a year ago.

Announcing the planned acquisition in February, Veeco’s CEO John Peeler said that the two companies’ product lines were highly complementary – Veeco’s sales are dominated by deposition equipment used in LED epiwafer production – and that the strategic combination should be completed by the end of June.