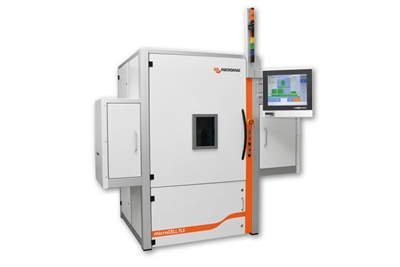 3D-Micromac, the Chemnitz, Germany, laser micromachining systems company, says that it has received volume orders from the solar industry for tools that will produce photovoltaic cells with a cumulative output of more than 1.5 GW.

3D-Micromac acquired the TLS technology around three years ago, via a deal with fellow German laser company Jenoptik. It can be deployed in both PV cell and silicon semiconductor wafer processing applications.

The beam delivery unit of the system includes two laser processing heads – one for initial scribing of the cell and a second for the thermal separation step.

3D-Micromac said that all the tools under order are set to be delivered to customers this year. With a typical cell providing a peak output of 5 Watts, the 1.5 GW of orders represents separation of around 300 million cells.

Although the company did not reveal exactly how many laser tools it is set to ship, in 2015 it reported that an order for 27 similar tools for a related process would support annual production capacity of around 2.5 GW.

According to 3D-Micromac, the TLS-separated cells show a significantly higher mechanical strength, better edge quality and lower power reduction, when compared with other laser scribing and cleaving approaches.

“A module power gain of more than 1 W was seen with TLS compared to conventional scribe and break methods, in addition to the 5-7 W per module gain of half-cell module technology,” claims the firm.

New tool eases laser ‘bottleneck’
The systems company has also just introduced a second-generation version of its “microCELL OTF” system. It carries out the laser contact opening (LCO) step in the manufacture of higher-performance passivated emitter rear contact (PERC) solar cells, which deliver higher efficiency by reflecting light back through the cell.

The latest version of the equipment offers a throughput of 8000 wafers per hour, more than double the throughput of its predecessor. 3D-Micromac launched the tool at this week’s “SNEC 2017” International Photovoltaic Power Generation Conference & Exhibition, being held in Shanghai, China.

“This is facilitated by dual-lane wafer handling and on-the-fly laser processing,” said the company. “The new tool generation meets customers’ requirements for inline integration into two- or three-line metallization machinery since the throughput of the single laser process step now matches that of the other process steps in the production line - ensuring that the laser process is not the bottleneck in material flow.”

While 3D-Micromac's business mostly relates to industrial processing steps, the company is also working on a new excimer laser technology aimed at a potentially revolutionary new approach to vision correction - as reported by optics.org earlier this year.