SPIE DCS 2017: lidar putting optics 'back in the global spotlight' 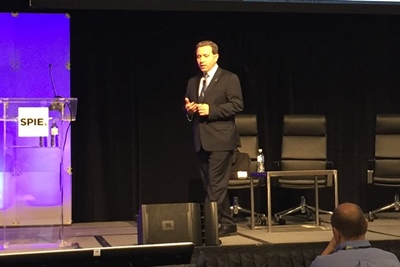 by Ford Burkhart in Anaheim
Louay Eldada, the founder and CEO of Quanergy Systems – one of the leaders among dozens of lidar companies targeting the self-driving car industry – now credits the sensors with putting optics back at the center of the technology world.

He gave a standing-room-only keynote talk on the industry stage at SPIE’s Defense + Commercial Sensing (DCS) event in Anaheim, California, on April 12. With Quanergy commanding an estimated valuation of $1.6 billion following last year’s $90 million round of venture funding, Eldada ranks his firm among the top three in a fast-growing field of around 80 competitors right now.

Among those competitors is Luminar Technologies, the latest venture-backed firm to enter the increasingly crowded field.

Lidar: ‘90s throwback?
“In the late ‘90s, optics was king,” said Eldada. “Now it’s king again, because of lidar, the hottest area of technology.” And he should know: during the infamous optical telecoms bubble-and-bust period, Eldada headed up photonics units at the likes of Honeywell, Corning, Telephotonics, and Dupont.

Since 2012, and following an excursion into photovoltaics, he has been with Quanergy. The Sunnyvale company now has 130 employees, with the figure likely to swell to 200 by the end of the year, at its ten locations around the world.

Among Quanergy’s 300-strong partner list are the auto giants Mercedes-Benz and Nissan, alongside parts firms Delphi and Koito, and sensor component maker Sensata.

While lidar systems have become something of a familiar sight on early versions of self-driving cars, typically sitting rather bulkily on top of the vehicle roof, Quanergy’s key focus has been to shrink both the size and cost of the technology.

Eldada showed a snapshot of a Mercedes coupe featuring two of his company’s solid-state lidar sensors. “You don’t see the ‘lab bench’ on the roof of the vehicle,” he said. Instead, he held up a small box, just the size of two playing cards, containing the core of his product. This is what “hides” behind the grille of the red Mercedes, Eldada told the crowd. That product, said to cost $250, is Quanergy's “Gen 2” effort.

“It’s really cheap stuff,” he said. “The magic is in the photonic circuitry.” Next up is “Gen 3”. It will have all the components on a single substrate, the entire lidar on one chip. “It could go inside every light switch in every home,” Eldada claimed.

Eldada predicts that it will bring the cost of a lidar sensor – not long ago measured in the hundreds of thousands of dollars – to just $100, when produced in volume in years to come.

Issues with automation levels
The company has a five-fold mission, the CEO said - save lives, as well as space, time, energy and cost. Outside of transportation, its target sectors include security, industrial automation, and 3-D mapping.

Interestingly, Eldada took issue with the “Level 1 to 5” system that the industry has adopted in order to describe the level of automation in self-driving cars.

In that breakdown, Level 1 involves minor driver assistance, while at Level 5 the car is entirely autonomous, with no human control; a driver able to sleep in the back seat of their vehicle. Level 2 provides automated parking, and cruise control to keep a set distance from traffic ahead.

But Eldada sees problems at Level 3, where a driver is expected to take over control of a vehicle in certain – perhaps unpredictable and hazardous - circumstances. “Maybe industry should skip Level 3,” he suggested. “If someone, say an older person, is taking a nap, and the car says to take over now, that can be a difficult situation. We should skip Level 3.”

Most car makers want the options well defined by them, he added. “For them, at 100 times per second, they want to decide what risks they want to take for the car.”

Interference ‘virtually impossible’
Eldada also said that drivers of different vehicles would likely have different “cultures”. For example in some situations, a Tesla driver might opt for a more aggressive way of driving, and decide to overtake, while Mercedes may decide that it is not worth shaking up its customer, and apply a steady brake instead.

Asked about the potential for interference or “cross-talk” from nearby cars with similar lidar navigation systems, Eldada said that this was “virtually impossible.”

“Every two microseconds, a lidar would have to send a pulse train, with a very short cycle. It has a code,” he explained. “Somebody else would have to send the exact same code, with exactly the same acceptance angle. How likely would that be? For all half-million points per second to have the same random code?”

Other common fears include difficult weather conditions, or rough road surfaces, but Eldada replied that the Quanergy sensors are “virtually weatherproof.”

“We run all the tests that are required,” he said, “for vibration and shaking, heat, challenging environments, hitting pot holes.” With mechanical lidar, he said, there is mean time between failures of around 1000 hours. “[With solid-state], we have 100,000 hours between failures."