But industry panel session in Anaheim hears that most quantum applications - particularly computing - remain a long way off. 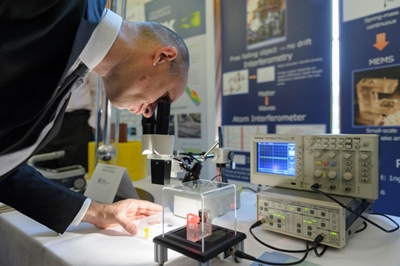 by Ford Burkhart in Anaheim
Attendees at a panel session on quantum information technologies (QIT) at SPIE’s Defense + Commercial Sensing (DCS) event in California heard that devices are still years, perhaps many years, away from true commercialization, but that development centers in the UK and Canada are leading the way in their eventual transition from the laboratory.

One pacesetter in the emerging field, civilian scientist Bhashyam Balaji from Defence Research and Development Canada in Ottawa, remains optimistic about what is currently tough theoretical work reaching the marketplace and offering vastly improved options in cryptography and elsewhere.

He was among those presenting at DCS in a session entitled “The Impact of Emerging Quantum Information Technologies on Information Fusion.”

That question focused on whether advances in the QIT field will bring the research frontier closer to “real-world” information fusion, which Balaji explained involves data from several vastly different kinds of sensors to provide better tools – analogous to the brain’s interpretation of sensory messages from your eyes, nose, and ears.

“If you think of a platform with many sensors, each will have strengths and weaknesses,” he said. “Information fusion is combining the data from several imperfect sensors, to provide enhanced information awareness.”

Balaji said that, in a similar vein, fully autonomous cars will need to integrate information from multiple sensors, asking where an object is and how fast it is moving. So-called information fusion combines attributes of various objects under observation.

Single-photon effects
In one quantum technology approach, a single-photon camera can yield imagery at a faster rate than otherwise possible. “You have nanosecond resolution of photon timing,” Balaji said.

One result of that could be the ability to image from a much longer stand-off distance, a phenomenon with obvious implications for the defense sector.

“We are on the cusp of developing new products,” Balaji said. “Maybe in the next decade we will get it done.”

At the moment the most likely location for that transition to commercially relevant products looks to be the UK, where four development “hubs” are focused on different aspects of quantum technology.

One of the hubs, called "QuantIC" and co-ordinated at the University of Glasgow, is working specifically on sensing and imaging applications of quantum physics, and has generated strong industry links, Balaji said.

Researchers in the UK are developing ultra-high sensitivity cameras, beating the current state-of-the-art by two orders of magnitude – something described by Balaji as “very, very serious”.

Such devices are able to visualize gas leaks and see through smoke, suggesting possible new applications built around photonics equipment that are able to harness quantum phenomena.

Canada too has invested a lot in quantum science, Balaji added, noting key centers of excellence at the University of Waterloo – home to the Institute of Quantum Computing - and Sherbrooke University.

“We need to transition our current understanding of quantum science to engineering products which are useful,” Balaji said. “There’s a critical gap there. The UK is the leader, creating hubs focusing on quantum computing and other [applications]. Canada is trying to catch up.”