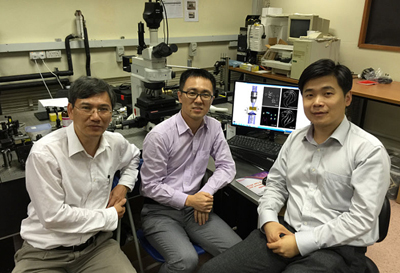 Super: The team from the National University of Singapore's Faculty of Engineering.

A team of researchers from the National University of Singapore's Faculty of Engineering has developed a novel lens for super-resolution imaging which breaks resolution limitations in microscopy and has potential applications in high precision failure inspection and biological research. The findings of the study were published in Advanced Materials.

While the optical microscope is a critical piece of equipment for scientific research and failure inspection in high precision industries, the imaging resolution of microscopes is conventionally limited by the diffraction limit of light. Existing efforts to break this fundamental diffraction limit through various technologies suffer from limitations such as a near-field operation, which requires the sample to be close to the microscope, or the dyeing of samples, which is an invasive process that affects the quality of the sample.

A research team led by Professor Hong Minghui and Associate Professor Qiu Cheng Wei from the Department of Electrical and Computer Engineering at NUS has now developed a new type of supercritical lens, which enables optical microscopes to capture images in real-time and with greater detail beyond the diffraction limit. Furthermore, this technique does not require any pre-treatment of samples or post-processing of the image.

Prof Hong said, “Our breakthrough is achieved in a non-invasive manner, coupled with the capability of real-time imaging. This could potentially open up a wide range of applications in areas such as high precision failure inspection in the semiconductor industry, and will also contribute significantly to biological research.”

Planar metalens is a high-performance, ultra-thin lens which has extraordinary capabilities in light modulation, as compared to traditional three-dimensional bulky optical lens. The NUS team’s supercritical lens, which is based on the concept of an optimised planar metalens, is developed using a new algorithm and it can be easily fabricated by a commercial laser pattern generator in high speed and at low cost.

Specifically, the team demonstrated an imaging resolution of 65 nanometres using the supercritical lens microscope, as compared to typical microscopes which have an imaging resolution of around 120 to 150 nanometres. In addition, this novel microscopy technique exhibits a significantly longer working distance of 55 micrometres, thus providing additional space for easier handling and adjustment of samples in real-world applications, and allowing the samples to be observed in greater detail.

This discovery by NUS researchers holds great promise for nano-imaging of semiconductor devices, and could enable faster, cost-effective and more accurate detection of defects in components such as integrated circuit chips which require imaging resolution that is less than 100 nanometres (sub-diffraction resolution). Current methods of defect detection require the use of the scanning electron microscope, which is a specialised and expensive equipment, and the process also needs to be operated in a vacuum environment.

In the area of biological research, most protein and cellular tissues require sub-diffraction limit imaging, thus resulting in the need for the dyeing of samples. The team’s invention could potentially lead to non-invasive investigation of the interior of biological cells, thus allowing researchers to study samples at a much deeper level than ever before. And this may eventually contribute towards new medical discoveries.

Moving forward, the NUS team plans to further enhance the imaging resolution of the novel lens and explore new applications for the technique. They have also filed a patent for the technology and is exploring opportunities to work with industry partners to commercialise their invention. 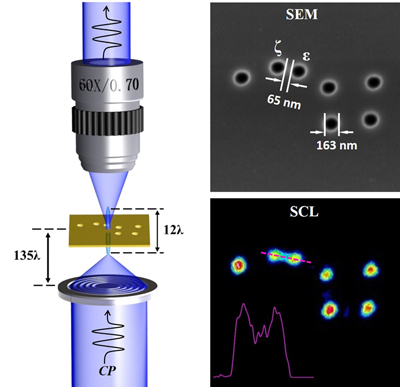 Design and specifications of the new SRM lens.

optics.org interveiwed Dr Qin Fei from the NUS SRM group about the development, specifications and potential applications of the new lens.

What are the technical specifications of SRM and what has NUS achieved?

Our super-resolution microscopy is based on one type of planar metalens – what we call a “supercritical lens” (SCL), which consists of a series of concentric belts. By precisely tailoring the interference diffracted from each belts through some optimization algorithm, a sub-diffractive focal spot can be created in far field.

The optimization target for the focal spot size was set in the range between Rayleigh Criterion (0.61λ/NA) to Super Oscillation Criterion(0.38λ/NA), in this case, we can get a subdiffractive focal spot without strong sidelobes. Then the non-invasive sub-wavelength imaging for the specimen can be obtained by scanning the sample point by point at the focal plane.

What are the materials of construction and method of production?

The supercritical lens is fabricated by a UV laser pattern generator (a Heidelberg, DWL-66FS), and patterned on a standard chrome photo-plate, which is 530 nm AZ1518 photoresist coated on 100 nm Cr film; the substrate is quartz plate. During the patterning, the substrate is scanned in x-y plane at a 40 nm steps, which can guarantee the fabrication precision. After the patterning, development inside AZ 400K is applied, then the standard Cr etching process is carried out by placing the plate in chromium etchant 1020AC to generate the final pattern.

The outer diameter of lens is 600μm, and the width of each transparent belts is fixed at 1.2μm. We can fabricate many lenses in one plate at a time. But for the results in our paper, we have just made one example for demonstration.

Describe the process of image collection and management – how does it differ from other types of SRM image management?

After achieving the subdiffractive focal spot in farfield, the non-invasive sub-wavelength imaging for the specimen can be obtained by scanning the sample point by point at the focal plane through a x-y scanning piezo-stage. The transmission signal is read by a PMT connected to a multifunction DAQ (NI, USB-6002), and processed by the same PC that controls the x-y scanning piezo-stage. The correlation between scanning step and its corresponding recorded signal is made by a customized labview code and therefore enables us to reconstruct the image in real time.

The most significant advantage of this type technology is that it could be used for universal specimens and does not depend on the luminescence of the objects.

The working distance of the lens we used in our paper is 55 micrometers, but other values are also possible depending on the design. Compared with our benchmark work (the superoscillation lens microscopy which also can realize SRM in far field without labelling), our working distance is far larger.

Is this the first nanoscale SRM achieved; have you patented the technique; is there a commercialization partner in position?

There are also some other techniques that can achieve nanoscale imaging resolution in far field, such as the STED, PALM, SIM, which earned the Nobel Prize in Chemistry 2014. But these approaches are based on the fluorescence process, requiring labeling the specimen by special dyes, so they are only suitable for biological samples. Our technique is a pure optical process, it does not need any preparation of the samples, which makes our technique useful for general applications.

We have already filed a Singapore patent for our technique, and also discussed with some partners about the commercialization.