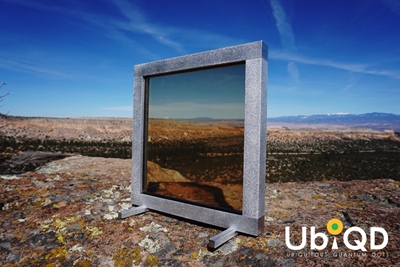 UbiQD, a New Mexico-based maker of cadmium-free quantum dots (QDs), says that it has now achieved quantum yields in excess of 80 per cent across the visible range, and of close to 100 per cent in the orange and red parts of the spectrum.

The work, claimed by the company to represent the highest reported photon conversion efficiency for cadmium-free QDs, suggests that it will be possible to incorporate the technology into efficient window “tints” that could be used in buildings to generate power.

Although UbiQD has not published a technical paper on the latest results – the company told optics.org that it did not want to disclose details about its QD synthesis in public – it says that the high quantum yields have been verified by “several” third parties, including accredited sites such as the US National Renewable Energy Laboratory (NREL) and the nearby Los Alamos National Laboratory (LANL), from which it was spun out.

Company founder and CEO Hunter McDaniel added that performance has also been verified by a major industry partner and potential customer, whose technicians measured quantum yields of 96 per cent and 97 per cent for two large batches of UbiQD material.

Solar windows
UbiQD explains that the high quantum yield should positively impact all manner of QD applications, from lighting and displays, to security, biotechnology, and design. At the moment, the company’s primary focus is on electricity-generating solar windows, for which it has won a Phase 1 Small Business Innovation Research (SBIR) development grant from the National Science Foundation.

“This cadmium-free quantum dot efficiency milestone takes us one step closer to achieving our vision of powering cities with ubiquitous quantum dot window tints,” said McDaniel in a company release.

Until recently, QD technology has tended to be based on either cadmium selenide or cadmium sulfide compounds, but in many parts of the world cadmium use is heavily restricted, along with lead and mercury, because of its high toxicity.

However, cadmium is still used in a variety of optics and photonics applications where it seen as indispensable, and where exemptions from hazardous materials legislation have been negotiated. Examples include cadmium-doped glasses for microscope lenses, solar panels based on cadmium telluride thin films, and mercury cadmium telluride (MCT) infrared detectors.

A more contentious application is the recent development of QD-enhanced LCD TVs, where rival makers of cadmium-containing and cadmium-free QDs have argued hard about the relative environmental benefits of each other’s technologies.

UbiQD, which is firmly in the cadmium-free camp after licensing its technology from LANL and the University of Milano-Bicocca in Italy, says it has recently been testing prototype luminescent solar concentrator windows on the square-foot scale.

The firm is currently hoping to begin pilot projects to validate the technology with potential commercial partners later this year, and to publish performance data in due course.