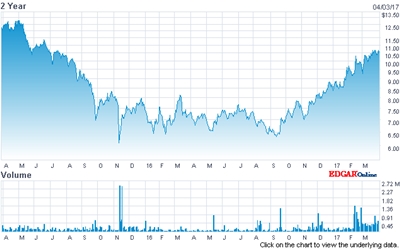 Syneron Candela, the Nasdaq-listed vendor of laser-based medical and aesthetic devices, is set to be sold to private equity giant Apax Partners, in a cash deal valued at close to $400 million.

The $46 billion fund has agreed a transaction price of $11 per share for Syneron Candela, whose products include multi-wavelength picosecond laser systems for removing tattoos and “pigmented lesions”, and alexandrite lasers for hair removal. It also offers non-optical technologies including ultrasound equipment for claimed fat-reduction treatments.

‘Go shop’ period
The Apax deal represents a 15 per cent premium on the firm’s average closing stock price over the first quarter of 2017, and comes shortly after Israel-based Syneron Candela said it broke even on full-year revenues of $298.1 million in 2016.

While the offer remains subject to approval by Syneron Candela shareholders, the firm’s board of directors has already approved the transaction unanimously – with chairman and co-founder Shimon Eckhouse, who still owns 7.4% of the company, agreeing to vote in favor of the deal.

“This acquisition is a strong recognition of Syneron Candela's leadership in the aesthetic medical device market, its leading world-class technology and unique global footprint,” Eckhouse said. “These exceptional assets are a result of the many years of hard work of our skillful and dedicated employees all over the world.”

He added: “We are confident that Apax will add significant value and expertise as Syneron Candela executes on its growth strategy while delivering innovative technologies to our customers and patients. I also believe that this transaction represents a positive outcome for our shareholders.”

Despite that backing from Eckhouse, the Apax agreement includes a so-called “go-shop” period through May 9, during which Syneron Candela can actively solicit, evaluate and potentially enter into alternative proposals from third parties.

Growth prospects
Steven Dyson, a partner at Apax and co-head of the fund’s healthcare division, said: “We have identified the medical aesthetics market as a highly attractive investment area given its long-term growth prospects.”

Dyson reckons that Syneron Candela is well positioned to capture the opportunity, mentioning the firm’s “exceptional” R&D capabilities and cutting-edge technology. “We are looking forward to partnering with the Syneron Candela team to continue its strong growth trajectory, and to seeing the even greater benefits it can deliver for customers and patients,” he said.

In Syneron Candela’s most recent investor conference call, which took place in February, CEO Amit Meridor had refused to comment on press speculation about a potential sale of the business.

But he did report that the company had just gained CE Mark approval for its combined laser and radio frequency product for hair removal, with other regulatory clearances for “body shaping” applications said to be in the pipeline.

Syneron Candela has also signed up celebrity endorsement for its products, with controversial Olympic swimming champion Ryan Lochte apparently using its laser hair removal techniques to help “shave” his times in the pool.

However, Lochte was subsequently dropped by Syneron Candela – along with several other sponsors - in the aftermath of a mysterious incident that took place at a gas station during last year’s Rio de Janeiro Olympics.