Canada-based Metamaterial Technologies raises $8.3M in series A round of venture finance. 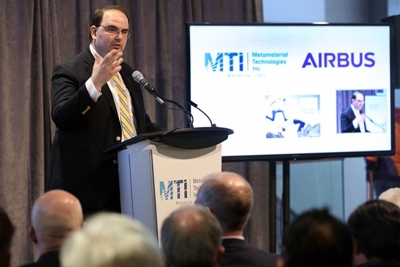 The early-stage round, led by Toronto-based Radar Capital, also saw participation from Nova Scotia’s Innovacorp, and others. The investment is set to help Halifax-based MTI commercialize its “metAIR” product and develop production tools to fabricate it.

News of the deal comes just a couple of months after MTI said that aerospace giant Airbus had signed an agreement to validate and test the new technology.

Laser strikes
With the cost of relatively powerful laser diodes dropping all the time, attacks on planes with laser pointers have increased dramatically in recent years – with thousands of “strikes” near airports now reported every year in the US and major airlines impacted. The UK government is seeking to introduce custodial sentences as a punishment for those targeting pilots.

In February Pascal Andrei, the “chief product security officer” at Airbus, said in a release from MTI: “We know from facts and conversations with clients that cockpit illuminations are real, immediate and increasing in frequency, and metaAIR will benefit our customers.”

In response to the new funding round, MTI’s founder and CEO George Palikaras said: “We look forward to working with our new institutional investors to accelerate the commercialization of metaAIR, expand our team and move MTI from pilot production to scaled-up manufacturing.”

That scale-up is likely to revolve around the use of high-resolution optical lithography tools that MTI has access to following its acquisition of California-based equipment firm Rolith in June 2016.

MTI is also partnering with Germany-based Covestro, a spin-out from the chemicals giant Bayer, to support the project. Covestro supplies a custom photopolymer film on which the metaAIR product is based.

Lighting and PV applications
Radar Capital’s CEO Mark Lerohl said of the decision to invest: “MTI is a world leader in metamaterials and is at a stage of development where Radar's investment can propel MTI to commercialization. We invest in companies looking for growth equity to access international markets while building towards a liquidity event for investors.”

Innovacorp has previously backed MTI, and its VP of investment Charles Baxter added: “We are pleased to make a follow-on investment in MTI and have Radar Capital as a co-investor.

“MTI continues to demonstrate the world-class capabilities of its technology platform as it commercializes its laser-protection solution for the aviation industry. We are confident in MTI's ability to address significant challenges in many other verticals.”

As well as the promise of laser protection for pilots in the civil aviation industry – something that could represent the first genuinely commercial application of photonic metamaterials - MTI says that the technology could be deployed in military applications, as well as more generally in transportation and glass manufacturing.

Currently the company is promoting three different versions of the technology for different applications: Lamda Guard for vision protection; Lamda Lux for enhancing LED lighting; and Lamda Solar to assist in photovoltaics.