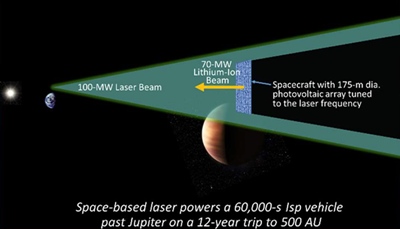 NASA is investing in an early-stage proposal to laser-propel small spacecraft to the nearest planets outside our own solar system, with an anticipated journey time of only 12 years.

One of 22 “Phase I” and “Phase II” projects backed by the agency, the effort – entitled “A Breakthrough Propulsion Architecture for Interstellar Precursor Missions” – will receive $125,000 for a nine-month feasibility study, to support initial definitions for the proposal and analysis of its concepts.

If the feasibility stage proves successful, the Phase I effort could move onto Phase II, where up to $500,000 in funding is available for two years of additional development.

10 km diameter laser array
Proposed by John Brophy from NASA’s own Jet Propulsion Laboratory in Pasadena, California, the idea envisages an orbiting 100 MW laser array with a diameter of 10 kilometers.

A high-efficiency photovoltaic array would then convert the massive laser power into electrical energy, which would in turn drive a 70 MW lithium ion propulsion system capable of generating enough speed for interstellar travel on a feasible time scale.

“We propose a new power/propulsion architecture to enable missions such as a 12-year flight time to 500 astronomical units (AU) - the distance at which solar gravity lensing can be used to image exoplanets - with a conventional (i.e., New Horizons sized) spacecraft,” writes Brophy.

While the prospect of interstellar travel might be the most eye-catching element of the proposal, the same architecture would also enable orbiter missions to Pluto taking less than four years, and the potential to deliver an 80 tonne payload to Jupiter orbit in just one year – enabling Space Odyssey-style human missions to the giant gas planet.

Lithium ion thruster
Brophy states that the key to the development of any system for rapid space transportation is the ability to process a lot of power with little “dry” mass, combined with the ability to provide a very high total spacecraft velocity change without using a lot of propellant.

“These two requirements translate into the need for a very low specific mass (kg/kW) and a very high specific impulse,” he writes.

“A specific mass of 0.25 kg/kW is enabled in our architecture by removing the power source and most of the power conversion hardware from the spacecraft and replacing them with a lightweight, photovoltaic array that outputs electric power at the voltage needed to drive a lithium-fueled, gridded ion thruster system at a specific impulse of 58,000 s.”

In comparison, the state-of-the-art achieved so far for specific mass and specific impulse, as represented by the Dawn spacecraft, are 300 kg/kW and 3,000 s, respectively.

In theory, the proposed architecture would provide a way to take advantage of extremely high-power lasers in a way previously described in a headline-grabbing manner by another NASA scientist, Philip Lubin. However, Brophy envisages the potential for a significantly larger craft than suggested earlier.

While the idea assumes the existence of the giant laser array and a PV system with an efficiency way beyond the current state-of-the-art, Brophy suggests that the sheer density of photons available to a spacecraft – even at huge distances - would translate to an “enormous” power that can then be harnessed to great effect.