Uber hits back at Waymo in auto lidar court battle

Uber and its self-driving truck subsidiary Otto have hit back at the Google-owned self-driving car firm Waymo, denying allegations that they have stolen and copied the latter’s lidar sensor technology.

Laser-based lidar has emerged as a key technology in the anticipated self-driving vehicle revolution, and in February Waymo had filed a lawsuit accusing Uber and Otto of stealing the ideas behind its “mission-critical” photonic sensors.

Uber: no ‘copycat’ lidar
In the latest filings with the San Francisco division of the US District Court, Uber described Waymo’s call for an injunction preventing it from using the allegedly stolen trade secrets a “misfire”, adding:

“Both of [the injunction motion’s] central premises - that former Waymo employees brought thousands of confidential Waymo documents to Uber to build a copycat lidar, and that Uber’s lidar closely mimics Waymo’s single-lens design - are demonstrably false.”

Uber goes on to claim that – unlike Waymo – it has developed a four-lens optical system for the lidar sensor, with two lenses to transmit the laser source, and another two to receive the back-scattered photons that provide autonomous vehicles with a dynamic view of hazards in their immediate environment.

“Waymo took one Uber schematic (inadvertently sent to a Waymo employee) and made several assumptions based on that one document to conclude that Uber’s lidar used a single-lens design,” adds Uber. “Waymo could not be more wrong, and Uber’s design could not be more different.”

Uber insists that its own lidar system was developed by a different team, using a different beam pattern, and leveraging different know-how. One of the key differences is its claimed use of two different optical cavities, while Waymo uses a single cavity.

The San Francisco company also states that it began developing the technology before it hired Levandowski as part of the Otto deal, and says that Waymo’s allegations would “fall like a house of cards” on even a cursory inspection of its lidar sensor.

Nevertheless, Uber does admit that it has found itself in a tricky legal position, because Levandowski has asserted his right to remain silent regarding the allegation that he downloaded 14,000 Waymo files before becoming an Uber employee. 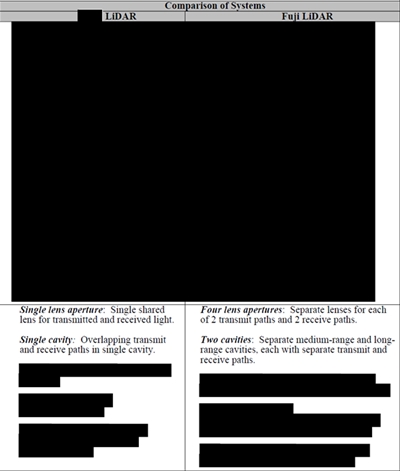 Carnegie Mellon collaboration
Uber says that it began establishing its own engineering group for autonomous vehicle development in February 2015, when it agreed a partnership with academics at Carnegie Mellon University, establishing a dedicated research center in Pittsburgh.

Meetings with lidar sensor makers began shortly after that, it says, with lead researcher Scott Boehmke deciding to implement a system using separate lenses for the transmit and receive optical paths.

In a court filing with heavily redacted technological details, Uber adds that by late 2015 it had decided to develop a customized lidar system with an unspecified collaborator, and began work on a custom beam pattern.

In March 2016, Uber’s Pittsburgh center agreed a deal with a partner to create a “dual-stack” lidar with 64-channel resolution.

That all took place before Uber acquired Levandowki’s startup company Ottomotto (subsequently referred to as “Otto”) in August 2016, with Uber claiming: “Uber acquired Ottomotto for its expert personnel, not trade secrets; in fact, all Ottomotto employees signed offer letters and attestations swearing that they would not bring any other company’s trade secrets to Uber or use them in connection with their Uber work.”

The firm also points out that Otto had already obtained its own lidar technology with the acquisition of startup firm Tyto LiDAR, providing further sensor expertise.

Despite the various internal technology developments, Uber also claims that it has only ever used commercially available lidar sensors in the self-driving cars that it has put on the road.

With all of that in mind, Uber denies that it has infringed any of the Waymo patents cited in the infringement suit, and its lawyers argue that there is no rationale for the court to grant the Google affiliate’s demand for an injunction.