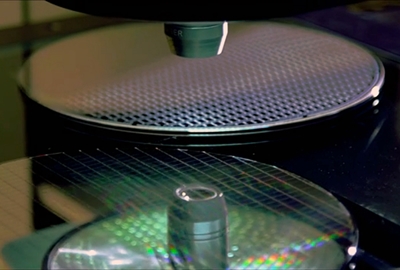 A 300,000 square foot semiconductor fabrication facility in the north of England is being earmarked for future production of photonic integrated circuits (PICs), under the new ownership of data center transceiver maker Kaiam.

The giant Newton Aycliffe site, originally built by Fujitsu in the 1990s to make silicon-based memory chips, has latterly been owned by UK-based Filtronic, cellphone amplifier maker RF Micro Devices, and – most recently of all – the laser projector firm Compound Photonics.

While Compound Photonics reported that it is selling the gallium arsenide (GaAs) facility because it no longer needs an in-house supply of laser diodes, Kaiam said that it plans to expand silica-on-silicon and transceiver manufacturing there – with a long-term plan to make photonic integrated circuits (PICs).

PIC plan
The deal, which is expected to close before the end of June, includes an investment by Compound Photonics into Kaiam to further develop the facility.

“The addition of the Newton Aycliffe facility continues [our] trajectory of vertical integration,” announced Kaiam, pointing out the presence of both 3-inch and state-of-the-art 6-inch wafer processing at the site.

The Californian firm's latest move follows its acquisition of Gemfire, which is based relatively nearby in Livingston, Scotland, in 2013. Kaiam currently operates an 8-inch silica-on-silicon line there to fabricate integrated optical components, alongside 40 Gb/s and 100 Gb/s optical packaging lines that are said to be running at near-capacity due to strong current demand.

“The new facility in Newton Aycliffe, with the fully operational wafer-fab, allows Kaiam to expand its silica-on-silicon and transceiver manufacturing, and provides a long-term roadmap to add integrated indium phosphide photonic integrated circuits (PICs) for advanced transceivers,” said the firm.

“Our optical integration technology is based on MEMS-assisted assembly of different materials and components,” added Bardia Pezeshki, Kaiam's CEO, in a company release. “We already have advanced integration in silica-on-silicon for manipulating light.”

‘Best of all worlds’
Pezeshki and his team believe that future modulation formats and the inevitable demand for faster speeds will require photonic integration in indium phosphide (InP) wafers for generating, modulating, and detecting light.

“By using our unique hybrid integrated technology for combining silica-on-silicon PICs and InP PICs, we get the best of all worlds,” Kaiam claims, saying that the Newton Aycliffe fab gives it both the technical capability and necessary scale for producing these devices.

“This acquisition not only allows us to ramp product in the short term, but gives us access to advanced Integrated InP PICs at low cost that we will need in the long term,” said the firm.

If approved and completed, the switch of ownership will see Compound Photonics become a “significant shareholder” in Kaiam, with its Newton Aycliffe team joining the data center firm's roster.

When it acquired the fab back in 2013, Compound Photonics outlined plans to make wavelength-stabilized green, red, and infrared laser there, for incorporation into its liquid-crystal-on-silicon displays and laser projectors.

“By shrinking the optics and pushing the electrical-optical conversion point close to the switch IC, the required line drive power can be minimized,” said Kaiam, with Corning’s VP of OEM David Hubbard adding: “This demonstration is an important milestone for the future of data centers and the role that optics will play.”