400-page study highlights market drivers and investment targets for US photonics through 2030.

By Ford Burkhart in Tucson

AIM Photonics is based in Rochester, New York; with outposts in Massachusetts; in Santa Barbara, California; in Tucson, Arizona, and elsewhere.

AIM said that because integrated optics technology is proprietary and is not manufactured in high volume, having multiple supply chain sources is difficult. Establishing an enabling silicon photonics technology as envisioned in the IPSR is a necessary step to achieving low-cost, high-volume manufacturing in this rapidly expanding market, it said.

More importantly, it said, “achieving this challenging task will require strengthening the mechanisms for cooperation among industries and among researchers who are all working in advanced technologies.” 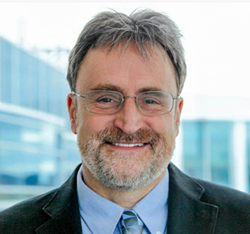 Liehr added, “The goal of AIM Photonics is to increase domestic competitiveness; however, in today’s global economy the IPSR must be an international roadmap that looks at the global technology needs of the integrated photonics supply chain. For integrated photonic systems to be low cost and have high-volume applications, a common platform approach is needed.

“Many of the platform needs can be addressed by the existing supply chain. AIM Photonics will develop technical projects that focus on key competitive needs.”

Lionel Kimerling of MIT, Executive Director of AIM Photonics Academy, said the Roadmap is intended “to define the 15-year path for changing the global network, the components in it, and most of the elements attached to it, in order to meet market needs. These changes include orders of magnitude improvements in power efficiency, cost per function, and number of networked ports — all at no increase in total cost.”

The Roadmap grew out of meetings with industry, government, and academia over 18 months, with input from scientists, researchers, and executives from throughout the supply chain for low-cost, high-volume integrated silicon photonics.

The full 400-page IPSR document can be accessed and downloaded on the IPSR website (login required).