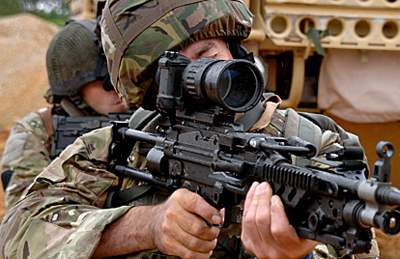 Qioptiq, a developer of diverse photonic products and solutions has won a $100 million contract from the UK’s Ministry of Defence for the supply of surveillance and target acquisition support (STAS).

Qioptiq is a division of Excelitas Technologies, which designs and manufactures photonics and other high-technology systems for a wide range of markets and applications in defense and aerospace, medical and life sciences, industrial manufacturing and research and development.

The company stated that this award will allow its St Asaph, North Wales, site “to provide support for surveillance and targeting equipment to the UK Armed Forces over the next six years, and will ensure vital night vision equipment is available to UK Armed Force personnel around the globe”.

The contract has options for an additional five years of support, which would increase the contract value by a further $84 million. The Welsh Government will also continue to play a pivotal role in supporting Qioptiq by investing £2.5m in a new purpose designed facility for the STAS contract adjacent to the main company site in North Wales.

Peter White, Managing Director of St Asaph and VP Land Business, commented, “We are delighted that we have received this major contract from UK MOD to support equipment vital to the safety of our soldiers in front line operations. The support from Welsh Government and the hard work, capability and commitment of our employees were the key factors in our success.”

Doug Benner, Excelitas Executive VP Defense and Aerospace, said “We appreciate the confidence the UK MoD has placed in us. This selection will allow us to continue the mission of ensuring STA equipment is available to the end user when needed. Excelitas’ Defense & Aerospace mission is to keep our troops safe with the best technologies and services.”

In 2013, Qioptiq was acquired by Excelitas Technologies, a global technology company focused on delivering customized solutions to meet the lighting, detection and other technology needs of OEM customers. The group employs approximately 5,500 employees in North America, Europe and Asia.