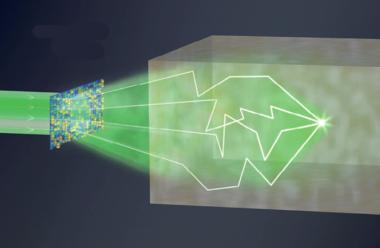 Finding ways to successfully image through light-scattering materials and opaque media is a topic of constant interest for developers of bioimaging platforms, since achieving it will help them to see deeper within tissues and complex biological systems than is currently possible.

One established approach to the problem is optical phase conjugation (OPC), techniques to precisely reverse both the direction and phase variation of a scattered light wave, returning it towards its exact point of origin within the scattering material.

In the right circumstances, an interaction back at the origin point of the scatter between this returned light and the original reference beam, along with the influence of an additional beam of focused ultrasound, will turn that location into a spot of comparatively high radiation intensity.

If a fluorescent marker happens to be present there, that spot can be imaged by optical microscopy techniques at a deeper point within the tissue than would otherwise be the case. But so far, not deep enough for practical purposes. Due to the complexity of the OPC operation and the highly scattering nature of many biological tissues, it has been difficult to achieve authentic deep tissue imaging even using these techniques.

Now however, a joint project at Caltech and the University of Twente has successfully applied OPC to scattered signals that have so far been considered too weak to be of any value. The research, published in Physical Review Letters, shows that phase conjugation is still possible even when far less than a single photon per optical degree of freedom is detected, effectively less than one photon per pixel of the detection sensor being employed to record the image.

Low photon budgets
"Complex wavefront engineering has the potential to focus light deep in biological tissues; but this is something that was previously thought to be impossible," commented Caltech's Changhuei Yang to Optics.org. "Tissues behave like very dense scattering fog, but wavefront engineering exploits the time-symmetric nature of elastic light scattering to accomplish an 'impossible' focusing task. It is possible to make a light wave travel as if it was traveling backwards in time, and we use phase conjugation to do that."

By demonstrating that phase conjugation can be used even when the "photon budget" is extremely low, the project points towards ways to achieve high-speed focusing through dynamic media, or imaging deep inside organic tissue. Yang anticipates that the analysis and implications of the study will serve as a stepping stone towards the adoption and improvement of OPC in realizing its biomedical applications.

"With the ability to generate a focused spot of light in tissues, deep tissue optical imaging becomes possible," he said. "While other deep tissue imaging methods exist, doing this in the optical regime opens up the possibility to probe the biochemical contents in the tissues. There are a wealth of light/matter interactions we can make use of, such as Raman, fluorescence, or non-linear optical interactions, which do not exist for methods such as ultrasound imaging, X-ray or MRI."

The principle could ultimately point towards new biophotonics implementations beyond imaging too, such as non-invasive deep-tissue targeted optogenetics activation. Another possibility, given that tissue ablation via irradiation is currently limited to the superficial surfaces of a target, would be the ability to perform ablation underneath that surface layer and carry out some form of incisionless surgery - a tempting concept, although not one available in the immediate future.

"To be clear, we are still some distance from these practical applications, as this is really a new scientific endeavor," noted Yang. "But we have shown that the optoelectronic version of OPC, an innovation that has fueled a lot of the recent complex wavefront engineering work, is actually more robust and capable of dealing with more limited-photon scenarios than was previously assumed. This bodes well for biological applications where we are constrained by the amount of light we can put into the tissues."