University of Arizona study indicates the role of the visual system in alleviating discomfort. 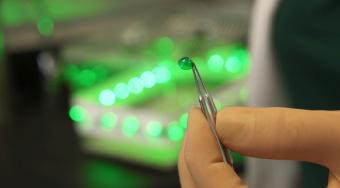 Light therapy of various kinds has been used in the past to accelerate recovery from injury through infra-red irradiation, and to influence a patient's state of mind as a way to mitigate depression.

But solid scientific investigation of the mechanisms and neurological effects of light therapy is still at an early stage, and few studies have investigated the possible role of light in pain perception.

A project at the University of Arizona has now taken a step towards the potential use of light as a more rigorous treatment for particular forms of chronic pain, by investigating the effects of visible-spectrum light from LEDs on the sensory thresholds in rats, as well as the light's influence on experimental neuropathic pain.

In particular, the study found that rats with neuropathic pain that were bathed in green light from a commercial 525-nm LED showed enhanced tolerance for thermal and tactile stimulus compared to rats that were not illuminated. The study was reported in the journal Pain.

Visual perception of the green wavelengths turns out to be the critical factor. Rats exposed to ambient white light but fitted with contact lenses allowing the green part of the spectrum to pass through demonstrated the beneficial effects, while a group wearing opaque lenses and seeing no light at all did not.

"We tried several other wavelengths, and in the paper we reported that blue light also had some analgesic action, but the effect was most pronounced with the green illumination," commented Mohab Ibrahim of UA's Banner-University Medical Center Tucson. "And whatever is happening, it's happening through the visual system."

In the absence of any previously published data, the project experimented with different light intensities and exposure times. The preliminary findings suggested that a light intensity of between 4 and 100 lux represented a possible sweet spot; lower than that and the illumination is too weak, while anything higher is bright enough to cause its own negative effects by irritating the rat's visual system.

An initial test of the effects on humans has also been carried out, via an approved small-scale double-blind trial on patients attending Ibrahim's clinic suffering from fibromyalgia, or chronic pain around the joints. Initial responses have been positive here too.

Future clinical trials
"Patients receiving treatment with the green light reported significant reduction in their pain compared to the control group, and were very happy - in some cases happy enough to want to keep the treatment lights after the trial was over," said Ibrahim. "This is not enough data to draw solid statistical conclusions, but the preliminary data are very encouraging and we intend to move forward with larger clinical trials."

Exactly how the visual system plays this role in pain relief will now be investigated further. One current theory relates to a stimulated increase in production of enkephalins, known to be involved in the regulation of an animal's response to harmful stimuli. Rats exposed to the green light were found to have elevated levels of enkephalins in the spinal chord, although how precisely this happens and the potential implications for humans is yet to be clarified. It already seems that the treatment works equally well in males and females, a possible improvement over some pain medications known to perform differently depending on patient gender.

"Does it work in people who are color-blind? We actually don't know yet," said Rajesh Khanna, UA associate professor of pharmacology. "The true mechanism by which the green light elicits a response is the big question. Others include whether repeated application builds up a tolerance to the treatment, as can happen with drugs, and how to expand the repertoire of pain modalities that green light can alleviate beyond fibromyalgia."

The project is both timely and needed, according to the researchers, given that the use of non-pharmacological methods for pain management and recent changes around legal availability of opioids are two current topics of discussion among US physicians and regulatory bodies.

"This is both a new application and a repurposing of existing technology to address chronic pain conditions, through a technique that comes with very a low risk profile and is at the same time cheap and affordable," said Ibrahim. "Sometimes the simple things are the best."