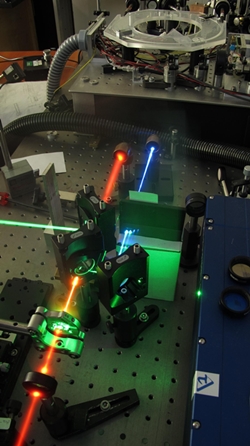 A group of researchers in Poland says that a new frequency-tripler device for femtosecond lasers developed under a European project is three times more efficient than existing components.

Members of the “MINIMODS” project consortium, which was funded under the European Commission’s Seventh Framework Program (FP7) support scheme and officially ended in 2015, published their latest results in the journal Nature Scientific Reports last month.

Crystal sandwich
The paper's lead author Piotr Wasylczyk and colleagues from the Faculty of Physics at the University of Warsaw have led the simulation and modeling work on which the new components are based.

They reported a third-harmonic generator (or frequency tripler) efficiency of up to 31 per cent, using a “sandwich” of nonlinear and birefringent crystals to convert 190 femtosecond pulses of 1040 nm light from an ytterbium-crystal laser into ultraviolet light.

The team says that the device is not only three times more efficient than alternative crystal triplers, but is also small enough to fit on a fingertip - thanks in part to the software simulation package developed by Wasylczyk and colleagues in Warsaw.

They explain that higher computational power, combined with clever programming tricks, allowed them to optimize the frequency conversion process from infrared to UV.

He added: “Once we define the input pulse parameters, such as energy, duration and spatial beam profile, we essentially start searching for the best design over a large space of parameters: the nonlinear crystal thicknesses, the beam size, the beam waist position, etc. And, to our surprise, once we found these optimum values, built the device and measured its performance, the output UV pulses were exactly as simulated. This kind of quantitative agreement between what one gets on the screen and then measures in the lab is rather uncommon in nonlinear optics.”

Industrial consortium
Figures published in the latest paper show a remarkable agreement between simulated and actual performance, with the Warsaw team saying that the same approach should work just as well for other pulsed sources operating at common laser wavelengths like 800 nm or 1550 nm.

The third harmonic generator is a tiny block of crystals stacked together, held inside a 1 inch-diameter metal holder that represents by far the largest element of the setup.

It was developed in collaboration with industrial consortium partners at UK-based M-Squared Lasers, Germany’s Laseroptik, Spain’s Radiant Light, and Time-Bandwidth Products – the Swiss laser firm that is now part of US-based Lumentum. The Fraunhofer Centre for Applied Photonics in Glasgow was also involved.

Wasylczyk says that the close industry collaboration was a “new, interesting” experience for his team. “We have learned a lot about how they approach research and product development,” he said. “I am not sure if they learned a lot from us, but the feedback we got from them on what we did and how was very positive.”

The third harmonic pulse energy is then maximized using a “simplex” method by varying the beam width and position of the focus with respect to the crystal stack. This procedure is then iterated for different thicknesses of SHG and SFG crystals.

Laser integration
Wasylczyk told optics.org that the tripler component, developed with Time-Bandwidth, will be integrated within the company’s line of ultrashort-pulsed lasers. The device is so small that it fits directly in the laser head, and can be hermetically sealed.

The Warsaw researchers are now developing their software towards more applications in optical design, while the 3D pulse propagation software is available on an open-access basis for non-commercial use and can also be purchased as a product.

“I believe the new generation of the 3D pulse propagation software may actually be a big step forward in the design of many devices where nonlinear broadband pulse propagation is involved, for example parametric amplifiers,” Wasylczyk says. “My impression now is that most people use simplified modeling and can only get so far with this approach.”

He points out that before the MINIMODS project the efficiency of third-harmonic generation had stagnated at around 10 per cent. “Nobody believed it can be pushed any further. And indeed it could. It is likely that similar progress is still possible elsewhere in nonlinear optics with the global approach to the design.”