The US National Oceanic and Atmospheric Administration (NOAA) has released the first images of lightning to be captured by an image sensor flying in a geostationary orbit.

On board the Lockheed Martin-built “GOES-16” satellite that was launched last November, the Geostationary Lightning Mapper (GLM) is a single-channel, near-infrared optical transient imager that detects momentary changes in an optical scene, indicating the presence of lightning.

While those kinds of imagers have been used in low-Earth orbiting satellites previously, this is the first to be able to detect lightning storms across the entire Western hemisphere at once.

According to NOAA, the instrument makes both detecting and predicting lightning much easier, meaning that forecasters will be able to alert the public to dangerous weather more effectively, and help route aircraft away from thunderstorms over oceanic regions where current data is relatively scarce.

“The GLM is transmitting data never before available to forecasters,” the administration reported. “The mapper continually looks for lightning flashes in the Western Hemisphere, so forecasters know when a storm is forming, intensifying and becoming more dangerous.

“Rapid increases of lightning are a signal that a storm is strengthening quickly and could produce severe weather.”

Early warning
The instrument is also able to detect in-cloud lightning, which NOAA says often occurs 5-10 minutes or more before potentially deadly cloud-to-ground strikes. “This means more precious time for forecasters to alert those involved in outdoor activities of the developing threat,” it added.

During heavy rain, GLM data will also show when thunderstorms are stalled or if they are gathering strength. NOAA says that when that information is combined with radar and other satellite data, it can help forecasters anticipate severe weather and issue flood and flash flood warnings more quickly.

“In dry areas, especially in the western United States, information from the instrument will help forecasters, and ultimately firefighters, identify areas prone to wildfires sparked by lightning,” it says. 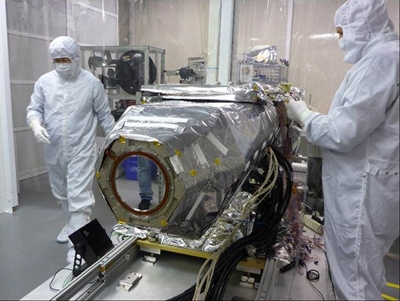 At the heart of the GLM is a staring CCD imager, operating in a single wavelength band at 777.4 nm and with a frame rate of 2 milliseconds.

It can measure “total lightning” (i.e. in-cloud, cloud-to-cloud and cloud-to-ground) activity continuously over the Americas and adjacent ocean regions with near-uniform spatial resolution of approximately 10 km.

As well as providing short-term weather forecasting advantages, data from the instrument will also be used in a database to track any decadal changes in lightning activity. NOAA says that this is important because of the key role lightning plays in maintaining electrical balance between the Earth and the atmosphere.

Multispectral imager
However, the GLM is not the main instrument on board GOES-16, which carries several other pieces of equipment. The Advanced Baseline Imager (ABI) represents the primary kit, and once fully calibrated and operational it will capture Earth imagery across 16 spectral bands – stretching from 450 nm to 13.6 µm - at high spatial resolution.

ABI is a multi-channel passive imaging radiometer designed to provide variable area imagery and radiometric information of Earth’s surface, atmosphere and cloud cover. The instrument has two scan modes: a default setting that will take a “full-disk” image of the Western Hemisphere every 15 minutes, an image of the continental US every five minutes, and two smaller, more detailed images of any areas where storm activity is present, every minute.

The imager can also operate in “continuous full disk” mode, providing uninterrupted scans of the entire hemisphere disk every five minutes – said to be five times faster than current capability on board other GOES satellites.

It will be used for a wide range of applications related to weather, oceans, land, climate and hazards, like spotting fires, volcanoes, floods, hurricanes and storms that spawn tornadoes.

Other instruments on board GOES-16 include a solar ultraviolet imager to analyze potentially dangerous solar flares, an X-ray irradiance sensor to monitor solar irradiance in the upper atmosphere, a magnetometer, and ion flux sensors.