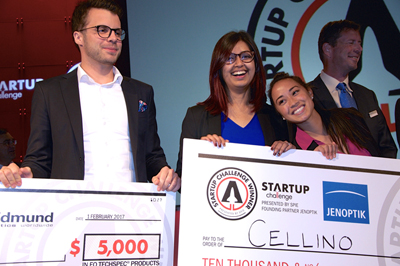 Harvard University spin-off Cellino, which has developed a new gene therapy technology based on lasers and nanofabricated substrates, was named the winner of the 2017 SPIE Startup Challenge, last week during SPIE Photonics West in San Francisco.

Marinna Madrid, Chief Scientific Officer, made the pitch for the Harvard team. Cellino has developed laser-activated nanodevices to efficiently and effectively deliver novel gene therapies to cells, to cure viral or genetic diseases such as leukemia and HIV that affect the blood.

She told optics.org that one of the first projects her company will be tackling in 2017 using Cellino’s therapeutic system will be the treatment of HIV in mice.

Second-placed Zeev Zalevsky, Bar Ilan University and IC Touch CTO and founder, pitched his company’s device that allows blind or visually impaired people to “see” by translation of visual information captured by a camera to spatial tactile stimulation of the cornea.

Other finalists in the competition were: 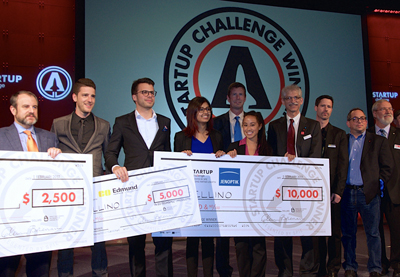 Prize-winning The contest provides $85,000 in cash prizes and other awards, and is supported by Jenoptik and sponsors Edmund Optics, Trumpf, Open Photonics, and the US National Science Foundation (NSF).

Jenoptik sponsored the cash prizes including $10,000 for first place, $5,000 for second place, and $2,500 for third place. The first-place winner also received $5,000 worth of products from Edmund Optics.

“The breadth and business potential of the finalists was really impressive” said Jay Kumler, President of Jenoptik Optical Systems, after the final round of pitches on February 1st. “All of the finalists should be congratulated on the exciting companies that they have launched.” SPIE President Glenn Boreman added, “These entrepreneurs are doing the hard work of bringing these technologies out of the lab so they can benefit the public.”

During the semi-final competition earlier in the week, Rick Schwerdtfeger, Director of the NSF SBIR/STTR Photonics Division, presented travel awards to Luis Moutinho of the Universidade de Aveiro and NU-RISE, and Madrid and colleague Nabiha Saklayen of Harvard and Cellino.

Moutinho made a pitch in the semi-finals for NU-RISE’s technology for controlling radiological doses for breast and prostate cancer treatment.