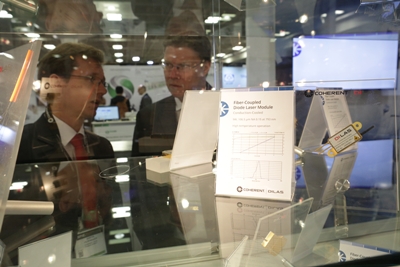 Bolstered by its first financial quarter to include a contribution from recent acquisition Rofin-Sinar, the California-headquartered laser company Coherent has posted what one analyst described as “stellar” results.

Stock up 10%
Excluding acquisition-related costs and other factors, Coherent reported a “non-GAAP (generally accepted accounting principles)” net income of $63.4 million for the quarter.

Combined with an outlook anticipating current-quarter sales somewhere between $390 million and $410 million, that sent the company’s stock price up 15 per cent in after-hours trading on the Nasdaq exchange, to a new record high of close to $185.

New orders for those systems, which are used in a key annealing step during OLED mobile phone display production, are set for delivery next year. While these kinds of displays have not yet made any real impact in tablet PCs, the recent launch of laptops featuring OLEDs could present a future opportunity, noted Ambroseo.

In addition to the OLED annealing application, some model-specific demand for back-end laser processing of phones is requiring Coherent to respond quickly, with hundreds of lasers sometimes ordered for steep production ramps.

“Coherent-Rofin” fiber lasers
With the integration of Rofin-Sinar said to be going according to plan, Coherent is now also benefiting from the newly acquired unit’s expertise in lasers for materials processing applications, and Ambroseo said he was pleased to see his new colleagues “embracing change” as the two firms align under a single banner.

With new 3 kilowatt fiber laser modules in the works, as well as an internal supply of high-power pump diodes, these lasers should be able to compete more effectively with those from key rival IPG Photonics.

IPG has traditionally been able to command a price advantage because of its exclusive focus on fiber lasers and a huge internal supply of high-power laser diodes to pump the sources, but Coherent-Rofin believes that it is able to offer a better solution for processing highly reflective materials like copper and aluminum – a market that could become more significant in as demand grows in battery production for electric vehicles. 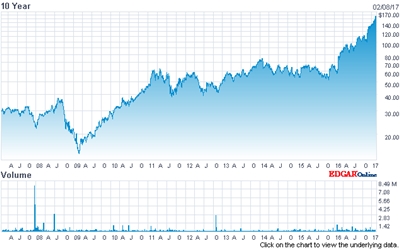 Speaking during an informal lunchtime session, Ambroseo said that the company has been able to build on historic success in areas like flow cytometry. It has recently targeted the high-profile application of gene sequencing equipment, slashing the selling price of a very compact source to capture market share – with sales volumes taking off accordingly.

As is typical, the CEO added that Coherent has “lots of irons in the fire”, and said in San Francisco that microscopy and laser treatment of cancer offered other growth opportunities. And speaking to investors during the latest quarterly results conference call, Ambroseo highlighted multi-photon microscopy as another target area, partly as a result of demand from optogenetics research.

• Set to open trading at around $185 on February 8, Coherent’s stock price now stands at an all-time high, and is equivalent to a market capitalization approaching $4.4 billion.