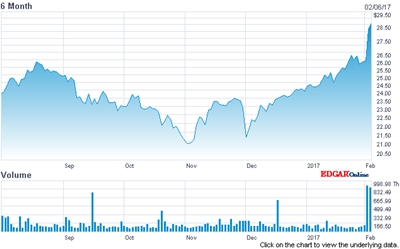 The cash-and-stock transaction is worth $815 million overall, and will be financed partly through a $200 million issue of stock by Veeco. Ultratech's stock price has risen in value by around 10 per cent since news of the agreement broke on February 2.

The combination of a more diverse range of technologies under a single roof should help to shield the merged entity from the strong swings in demand for capital equipment that tend to plague the semiconductor sector.

For example Ultratech, whose clients include many of the top-ranking chip manufacturers – the likes of Intel, Samsung, TSMC – posted a 30 per cent increase in sales to $194 million in 2016, having laid off 10 per cent of its workforce in late 2015.

The Silicon Valley firm, headquartered in San Jose and with just over 300 employees currently, sells lithography systems for wafer-level packaging applications, a fast-growing sub-sector within the wider semiconductor industry.

Ultratech has also pioneered the development of laser spike annealing systems, which can be used in the production of both logic chips and LEDs.

$15M cost savings
Veeco’s CEO John Peeler said that the “strategic combination”, expected to complete by the end of June, will establish the New Jersey firm as a leading equipment supplier in the high-growth area of advanced packaging – and strongly complement Veeco’s leadership as a key supplier of epitaxial systems.

Ultratech CEO Arthur Zafiropoulo added: "Both companies have a strong heritage of developing innovative and cutting-edge technologies. The combined company will create a formidable team to execute against growth opportunities and deliver significant value to customers and shareholders.”

Consolidation has been a key trend in the semiconductor sector in recent months, and the combination of Veeco and Ultratech is expected to realize around $15 million in annualized cost savings within two years of the deal being completed.

While the boards of both Veeco and Ultratech have unanimously approved the deal, it is still subject to assent from Ultratech’s shareholders. Post-closure, they stand to own only around 15 percent of the combined entity – despite Ultratech accounting for approximately 37 per cent of aggregate sales currently.

The deal will also subject to regulatory approvals in the US, where the Department of Justice recently nixed the planned merger between Lam Research and KLA-Tencor.