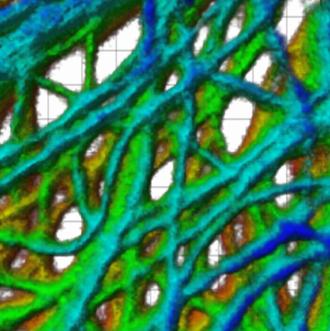 Two is better than one: double-depletion

A technique developed at Karlsruhe Institute of Technology (KIT) promises to improve the quality of images delivered by stimulated emission depletion (STED) fluorescence microscopy, one of the family of super-resolution microscopy techniques.

Conventional STED involves the use of two laser pulses - one to excite fluorescence, followed by a synchronized second pulse to selectively quench emission in areas away from a central undepleted confocal region. Judge the parameters correctly, and that central area can shrink below the nominal diffraction limit but still be imaged.

However, in practice a fraction of fluorophores in peripheral regions of that confocal volume may escape this de-excitation, giving rise to a residual background signal that is difficult to measure directly. Moreover, the intense STED pulse itself can create background by exciting, rather than depleting, the sample.

The new method from KIT adds a third pulse to the STED scheme - a further depletion pulse which intentionally quenches the confocal region of interest, to leave only an intrinsic background. The work was published in a Nature Photonics paper.

Christened stimulated emission double depletion (STEDD), the technique allows accurate measurement of the background intensity, through calculation of a weighted difference of photon events collected before and after the second STED pulse. That background can then be removed from the final images.

The enhanced image quality produced by STEDD should allow better analysis of densely arranged molecules and biological structures in 3D. Gerd Ulrich Nienhaus of KIT noted that this method could be especially advantageous for nanoscopy on living cells or tissues, where the fluorescence decay time of a fluorophore can be affected by interactions with its environment.

Pulsed excitation and depletion
"In normal STED imaging, the background is suppressed in the simplest way by subtracting a constant background level," he commented. "While that may result in beautiful pictures in some cases, it introduces errors if you want to quantitatively analyze the images. For 3D STED imaging, in particular of dense structures such as chromatin in the cell nucleus, the amount of background is substantial and structured. Here, STEDD is very helpful indeed."

Previous attempts to remove the unwanted background have largely been intended for use in so-called CW STED approaches, which avoid employing a costly pulsed source for both steps of the process and instead use it only for the first excitation stage. The KIT technique uses pulsed excitation and depletion, which yields the best signal-to-noise ratio.

"By using a second STED pulse, we essentially use filtering in both temporal and spatial domains for optimal noise suppression," said Nienhaus. "A key advantage is that we can move the STED laser wavelength closer to the excitation peak, so the STED power can be lowered to reduce photobleaching, while the stronger background signal is removed."

The KIT project tested its STEDD technique by imaging the microtubular cytoskeleton of HeLa cancer cells and found a six-fold improvement in signal-to-background ratio, proving the effective suppression of the background signal in the new approach. Further tests in live-cell imaging with green fluorescent proteins confirmed that the broad background present in STED imaging of those tissues was also completely suppressed in STEDD.

3D imaging of cells
STEDD involves an additional laser pulse, but one that is not strong enough to cause additional photodamage to samples according to the KIT team, countering one potential disadvantage. Another consideration is the inherent trade-off between high-resolution image information and the precise measurement of a low-resolution background, although this has proven to be tolerable in practice, and the project has successfully imaged even weakly-emitting red fluorescent proteins by the STEDD method.

Background can also be a problem for quantitative microscopy methods such as fluorescence correlation spectroscopy (FCS), where measurements are normally done with a diffraction-limited focal spot of around one femtoliter volume. This can restrict FCS to imaging of very dilute concentrations, ideally with just one single molecule in the imaging volume.

Combining conventional STED nanoscopy and FCS into a STED-FCS methodology is already known to extend the range of observable concentrations towards the higher levels found in biological samples - but successfully so far only on 2D samples, since depletion works well in the focal plane but less well in other out-of-focus planes.

"Applying regular STED-FCS in 3D suffers from significant background that cannot be efficiently removed, which is why there had been no serious biological applications so far," commented Nienhaus. "The development of a useful 3D STED-FCS method to overcome this was our motivation for developing STEDD, and the excellent effective point-spread function generated by STEDD is most beneficial for FCS, and of course for imaging as well."

The next steps for Nienhaus's project include applying both STEDD-FCS and STEDD imaging to quantitative nanoscopy of cell signaling processes, and to the interactions between cells and nanoparticles. "In our group, development of new methods goes hand-in-hand with applications in the imaging of live cells, tissues and organisms," he said. "We also have a few further improvements to the technique already in the pipeline."