Airbus has signed a deal with the Canadian photonics firm Metamaterial Technologies (MTI) to validate and commercialize a new optical filter technology that promises to protect airline cockpits from laser strikes.

The development aims to solve a growing problem in aviation – with dozens of laser attacks on pilots’ vision now reported on a daily basis globally.

“We look forward to continuing our relationship with @Airbus as we move to commercialize #metaAIR" -Maurice Guitton, MTI Board Chair pic.twitter.com/FTsSPL91X8

Laser attacks
Earlier this month the UK government said that it intended to introduce the possibility of a jail sentence for people caught shining laser pens at pilots, as well as at train and bus drivers.

According to the UK’s Department of Transport, the first laser attack on an aircraft was reported in 2004, with more than 200 attacks reported per year by 2008. Since 2011, with the wider availability of cheaper, higher-power lasers, there have been approximately 1500 attacks per year on aircraft.

Meanwhile figures from the US Federal Aviation Administration (FAA) suggest that in 2015 reported laser incidents nearly doubled to 7703 in commercial aviation, with almost 600 reported by Transport Canada.

In February 2016, a Virgin Atlantic flight from London to New York turned back to Heathrow Airport after a laser was directed into its cockpit shortly after take-off, while a British Airways pilot reportedly suffered significant eyesight damage from a "military-strength" laser attack.

What Airbus and MTI are proposing is a potential technological solution to the problem, using the optical filters developed by MTI’s subsidiary Lamda Guard.

The two have worked together previously, having signed an initial deal in June 2014 to research the possibility of using thin-film materials to block specific laser wavelengths. Green lasers are the most distracting to pilots because of the sensitivity of the human eye’s receptors to green light, and are based on frequency-doubled light from near-infrared diode sources.

If successful, the new deal should see Airbus validate, certify, and commercialize the laser protection product, dubbed “metaAIR” by MTI. 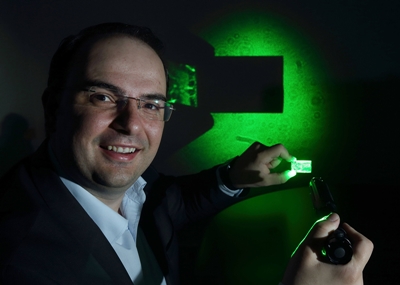 Vision protection
Pascal Andrei, the “chief product security officer” at Airbus, said in a release from MTI: “We know from facts and conversations with clients that cockpit illuminations are real, immediate and increasing in frequency, and metaAIR will benefit our customers.

“We also see an increasing number of possible applications for metaAIR, beyond the commercial aircraft division.”

The MTI agreement is carried out under the “start-up 2 partner” program run by Elsa Keïta at Airbus Corporate Innovation. Keïta appeared alongside MTI executives and local government representatives at MTI’s Halifax, Nova Scotia, headquarters to announce the new development agreement.

Navdeep Bains, Canada’s minister for innovation, science and economic development said of the deal: “Our objective is to place Canada and its citizens on innovation’s leading edge. The presence of Airbus here today demonstrates that highly skilled Canadian researchers and entrepreneurs, like those at MTI, are creating innovative solutions to global problems.”

Also speaking at the project launch, MTI’s founder and CEO George Palikaras added: “We are given the opportunity to propel our platform technology and learn from some of the top aerospace engineers while understanding the rigors of developing a product for the aerospace industry.

“metaAIR will provide vision protection to pilots in the aviation industry and can offer solutions in other industries including the military, transportation and glass manufacturers.”

Photopolymer films
The MTI technology relies on thin-film materials that can be produced in large-area sizes using high-resolution optical lithography equipment. In June last year, MTI acquired California-based lithography specialist Rolith to accelerate the development of metaAIR, which the company says can be manufactured in meter-scale rolls.

MTI is also partnering with Germany-based Covestro, a spin-out from the chemicals giant Bayer, to support the project. Covestro supplies a custom photopolymer film on which the metaAIR product is based.

According to Covestro, the polycarbonate-based photopolymer material is being aimed at a wide range of industrial holography applications aside from airline cockpit protection, including holographic light-guiding elements for future mobile device screens, head-mounted and virtual-reality displays, and counterfeit-resistant holograms for labeling high-value consumer goods.

Covestro’s marketing chief Thomas Fäcke said: “MTI is at the cutting-edge of optical applications. They have developed a unique optical filter that is different from anything currently available on the market, and we have been working with them for the last two years to provide a speciality photopolymer material film and support the required volume.”