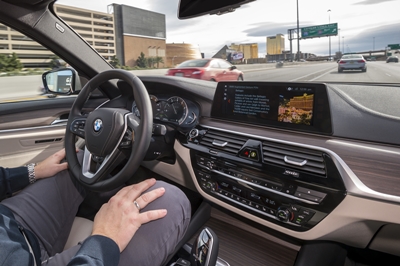 California-based TetraVue is the latest developer of lidar technology to cash in on the autonomous vehicle boom, landing $10 million to further develop its high-definition time-of-flight flash system.

Robert Bosch Venture Capital and Nautilus Venture Partners led a series A funding round worth $10 million that will see the company double its workforce to around 40 people. The San Diego firm, founded by Paul Banks back in 2008, was busy hiring for a series of engineering positions during a job fair at the recent Photonics West event in San Francisco.

Other backers in the series A round included the Samsung Catalyst Fund and giant the Chinese electronics manufacturer Foxconn.

Rock or bag ahead?
TetraVue is developing a high-density, time-of-flight imager based around a 2-million-pixel sensor and optics that Banks says simplifies the way in which a scene can be captured and processed – for example distinguishing between a rock and a bag on the road ahead of a car; something that existing sensors struggle to do.

While self-driving cars are becoming a familiar sight thanks to the efforts of Google, BMW, Volvo, Ford and others, something not generally known is that these early autonomous vehicles rely on kilowatt-scale computer power hidden in the trunk to crunch the enormous datasets being captured in real time.

By combining a camera-based system based on an off-the-shelf light sensor with a simple algorithm, Banks believes that TetraVue is able to make that computation far easier, while delivering high-definition imagery.

“We solve the problem optically,” Banks said, adding that the technology’s current range of 30 meters will be extended to 200 meters within a year.

Partnerships
In response to the funding round, Banks said: “We are thrilled to share that TetraVue has officially closed its largest round of funding to date … we plan to use this financial support to continue to deliver state-of-the-art 3D vision technology to enable smart vision for smarter machines.”

TetraVue said that it was currently developing partnerships with car manufacturers, as well as developers of artificial intelligence software for the auto industry and other hardware makers, to be part of what it describes as the “eyes and brain” of self-driving vehicles.

Luis Llovera, managing director of Robert Bosch Venture Capital, said in a TetraVue release: “TetraVue is unparalleled to any other existing technologies in the three-dimensional flash lidar space. We see its technology as being key to the enhancement and development of the autonomous car industry, which will be the future of transportation as we know it.”

Connie Sheng from Nautilus Venture Partners said that the approach gave cars “perfect” vision, allowing them to make better decisions. While the range of operation has so far been used as the normal benchmark for lidar performance, TetraVue says that high-definition performance is a critical element to ensure safety.

Banks adds that the company is not solely focused on the automotive space, and that TetraVue’s flash lidar approach will support what he calls the “Vision for Things” market – a confluence of the emerging Internet of Things and machine vision.

Speaking in San Francisco, Banks said that this would include areas like augmented reality, 3D sensing, and unmanned aerial vehicles.