For fast and non-invasive screening applications in spectroscopy, surveillance, cancer diagnosis and more. 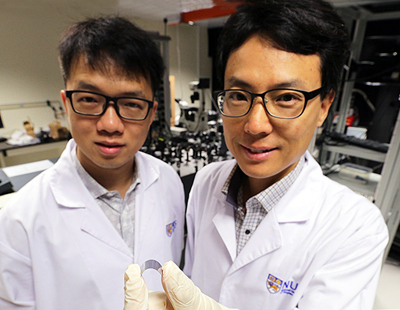 Researchers at the National University of Singapore (NUS) say they have given a “big boost” to the global research effort aimed at developing terahertz technologies for a variety of sensing and medical applications.

Led by Associate Professor Yang Hyunsoo and Dr Wu Yang from the Department of Electrical & Computer Engineering at the NUS Faculty of Engineering and NUS Nanoscience & Nanotechnology Institute, the research team has developed high performance, low-power terahertz emitters, which they say could be mass-produced at low cost, addressing one of the critical challenges for industrial application of this technology.

The emitters, which are used for the generation of terahertz waves, can also function on flexible surfaces without compromising on performance. The team’s work has just been reported in Advanced Materials.

Portable handheld terahertz sensors can be used for detecting explosives, in wearable sensors to detect chemical agents, in compact devices for identification of defects in microchips and in non-invasive imaging techniques for a range of medical purposes.

The NUS development was achieved in collaboration with researchers from the Institute of Materials Research and Engineering under Singapore’s Agency for Science, Technology and Research, as well as Tongji University in China.

Prof Yang commented, “We believe that this invention will accelerate the application of terahertz in various fields. In the area of safety surveillance, our invention can contribute towards miniaturization of bulky THz systems to detect dangerous chemicals and explosives. Furthermore, fabricating our device on a flexible surface also opens up many exciting possibilities for it to be incorporated into wearable devices.”

Dr Wu, who is the first author of the Advanced Materials paper, added, “Traditional methods of generating THz waves often require expensive, bulky high-power lasers. Our emitters show better performance compared in many aspects. We have also developed a fabrication process to produce these emitters in large quantities at a low cost.”

The team also devised a novel, low-cost fabrication technique to produce the emitters. A large wafer-scale film can be deposited and subsequently diced to a large quantity of ready-to-use devices, thus making this production method commercially scalable. The research team has tested the device on flexible surfaces and found that its performance was not compromised despite being subjected to a large bending curvature.

In the future, the team is planning to build a compact spectroscopy system based on its advanced THz emitters. The researchers are also looking into enhancing THz emission for specific wavelengths. The research team has filed a patent for the invention and says it is hoping to work with industry partners to further explore various applications of this novel technology.