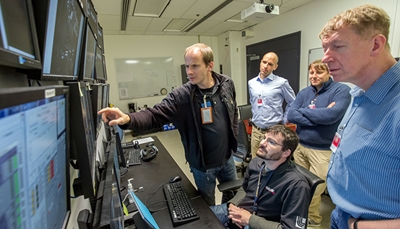 Fired up: the HAPLS team at LLNL

According to LLNL, the milestone means that the system is ready for delivery and integration at the European Extreme Light Infrastructure Beamlines facility project (ELI Beamlines) in the Czech Republic.

‘Workhorse beam’
ELI officials have described the “L3” beamline, which will feature the HAPLS system, will be the “workhorse” beamline at the new user facility, providing high-energy, ultrashort pulses of light with an unprecedented repetition rate that will enable scientists to carry out cutting-edge experiments far more rapidly.

LLNL specified that HAPLS’ 28 femtosecond laser pulses had delivered 16 Joules - equivalent to around 0.5 petawatts per pulse - at a rate of 3.3 Hz.

In a statement from the giant US facility, which also houses the National Ignition Facility (NIF), LLNL director Bill Goldstein said: “Twenty years ago, LLNL pioneered the first petawatt laser, the NOVA Petawatt, representing a quantum leap forward in peak power. Today, HAPLS leads a new generation of petawatt lasers, with capabilities not seen before.”

The latest technical achievement comes only three years after the HAPLS team announced at SPIE’s Photonics West event that it had signed a deal with Austria-based Femtolasers to develop HAPLS and build a petawatt-pulsed laser capable of a 10 Hz repetition rate. Femtolasers has subsequently become part of laser firm Spectra-Physics, itself now a subsidiary of MKS Instruments.

Shipment of HAPLS to Prague had initially been pencilled in for 2016, although after an issue with floor vibrations at the Czech site that schedule has been delayed slightly. However, officials said during this week’s Photonics West event that the L3 beamline is expected to be up and running for initial user experiments in early 2018.

“The high-repetition-rate of the HAPLS system is a watershed moment for the community,” he said. “HAPLS is the first petawatt laser to truly provide application-enabling repetition rates.”

Critical to that performance are a set of hugely powerful laser diode arrays, which were fabricated by diode specialist Lasertel.

Roman Hvezda, the ELI Beamlines project manager, added that the HAPLS development has been “quite straightforward”. He said: “Given the design requirements, nobody else could deliver this system in such a short time on schedule and on budget. It’s a great benefit to be able to cooperate with Livermore, a well-established lab, and this will be a basis for continued cooperation in the future.”

LLNL and ELI Beamlines scientists and engineers have been working side by side on all parts of the laser system, officials from the two facilities said.

“One of the real successes of this endeavor was that very early on, the client was fully integrated into the commissioning and operation of this laser,” Haefner said. “This provided hands-on training and expertise right out of the gate, helping to ensure operational success once the laser is installed at ELI Beamlines. We look at this as a long-term and enduring partnership.”

HAPLS is now set for transfer to ELI Beamlines, where it will be integrated into the facility’s laser beam transport and control systems, then brought up to its full design specification, with pulses of more than a petawatt firing at 10 Hz.