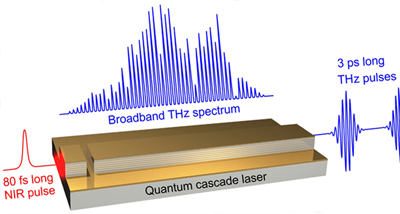 Broadband terahertz amplifier based on a quantum cascade laser.

Researchers at TU Wien (Vienna, Austria) and ETH Zurich (Switzerland) have succeeded in generating ultrashort terahertz waves. With lengths of just a few picoseconds, these pulses are suited to spectroscopic applications and can enable extremely precise frequency measurements to be taken, says the team.

A working group led by Prof. Karl Unterrainer at the Photonics Institute at TUW has been developing quantum cascade lasers (QCLs) as an efficient means of generating terahertz waves. QCLs consist of a precisely defined sequence of several hundred semiconductor layers a few nanometers thick.

This construction means there is the possibility for the operator to select the exact energy state at which the electrons remain within the semiconductor structure. This in turn allows the frequency of the laser light emitted to be tuned to suit various inspection and spectroscopic applications.

With the capability of being able to determine the laser wavelengths themselves, several quantum cascade structures with different output frequencies can be stacked on top of one another, with the aim of generating broadband terahertz radiation.

Furthermore, if the discrete laser lines are linked together to establish a fixed phase relationship between the laser modes, a “frequency comb” is formed. Frequency combs make it possible to take extremely precise measurements of the absolute frequency of the light being used, which is essential for a huge number of applications.

The discovery of the frequency comb more or less revolutionized optical metrology and was honoured with the Nobel Prize for Physics in 2005. Over the past four years, researchers worldwide have been working to generate a terahertz frequency comb using a quantum cascade laser as part of the EU project TERACOMB, completed in 2015. Led by Dr Juraj Darmo from the Vienna Photonics Institute, the team of international research groups has succeeded in generating the first broadband terahertz frequency comb based on semiconductor technology. 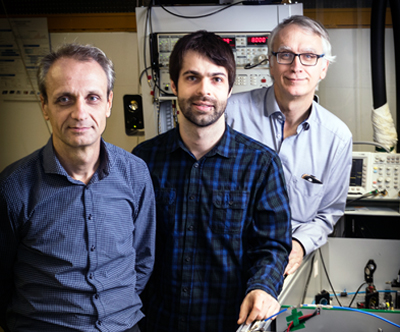 A method developed by the group led by Prof. Unterrainer makes it possible to analyze internal quantum cascade laser parameters during laser operation. This technique is based on time-resolved spectroscopy, with broadband terahertz pulses penetrating the sample to be measured.

Based on femtosecond lasers, this technology can be used to collect the full information content relating to the time and frequency range with just one single measurement. As a result, the scientists at the Photonics Institute have managed to quantify the optical gain coefficients as well as the optical dispersion in broadband terahertz quantum cascade lasers, improving their understanding of the complex dynamics at play. “These findings allow us to increase the laser bandwidth even further and to improve the efficiency of frequency combs,” explains Juraj Darmo.

One unresolved issue with terahertz quantum cascade lasers had been the existence of laser lines with different propagation speeds. If there are laser modes with a higher lateral order, the intensity is distributed very unevenly between the laser lines, thereby reducing the usable bandwidth and preventing the generation of a frequency comb.

To prevent these modes from oscillating, the losses must be increased to such an extent that they do not reach the laser threshold. By adding a tailored lateral absorber to the edges of the laser resonator, the TUW/ETHZ researchers suppressed the higher lateral modes entirely, without having any relevant impact on the fundamental modes. The result was an emission bandwidth covering a full octave, even mode distribution in the middle at 700 GHz, and a frequency comb with a bandwidth of 440 GHz.

Furthermore, the lateral absorbers enable the generation of ultrashort terahertz pulses with pulse widths of less than 3 ps, which represents what they say is a new world record for terahertz pulses generated using a quantum cascade laser. “It was truly amazing to see how a relatively minor adjustment to the waveguide could bring about such a dramatic improvement,” said Dominic Bachmann, who has just finished writing his dissertation on broadband quantum cascade lasers.