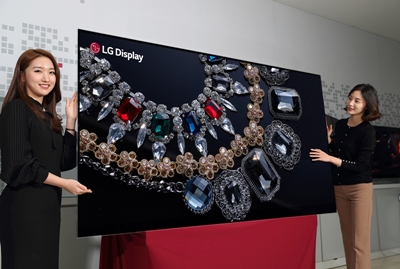 Sales of organic LED (OLED) TVs spiked ahead of the recent holiday season, according to a new report from analyst company IHS Markit.

Seemingly prompted by substantial price cuts and more competition ahead of the “Black Friday” promotional weekend, global shipments of OLED TVs in November 2017 jumped 133 per cent on the same month in 2016, rising to 270,000 units.

And while that number remains dwarfed by the equivalent figure for LCD TVs, which declined slightly year-on-year to 24.4 million units, it looks to represent something of a breakthrough for the newer technology.

Price drop
The technological advantages of OLED TVs stem from the direct emission of light from organic material that makes up the screen’s picture. Compared with LCDs that rely on a white backlight to produce color images, OLED displays provide more deeply saturated colors, and richer blacks.

OLED market penetration has been held back by the relative lack of manufacturers and stubbornly high pricing. But now that could be starting to change.

LG Display (LG), the sole manufacturer of the raw panels upon which all OLED TVs are based, remains the market leader by far. Park and colleagues say that the Korean company, which has invested billions of dollars into the giant facilities needed to produce the technology, accounted for 92 per cent of global shipments in 2016 - through its LG Electronics (LGE) subsidiary.

It added that LGE’s own-branded shipments of OLED TVs jumped 31 per cent from October to November 2017.

Thanks to the huge internal investment by LG, its annual OLED TV panel shipments are expected to ramp from 1.7 million units last year, to reach 6.5 million in 2020. By then, there ought to be more competition in terms of panel makers, as Chinese OLED fabs come on stream.

IHS Markit has previously estimated that the average cost of producing an ultra-high-definition 55-inch OLED TV panel will drop from $582 in mid-2017 to $242 by 2021.

Meanwhile, LG Display is entering the global lighting market with its OLED panels. In December, the Korean company announced a "massive surge" in production and launched its new OLED light brand, "Luflex".

“LG Display’s step to start mass production at the new line marks a significant turning point in the lighting industry,” said Sung Soo Park, the VP who heads up the OLED Light division at LG Display. “We expect that this will improve the price-competitiveness of OLED light technology which in turn will trigger widespread adoption of OLED lighting around the world.”