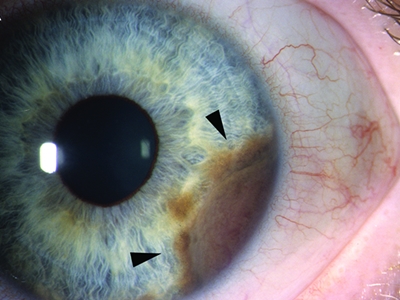 Aura Biosciences, a Massachusetts company developing a laser-activated drug treatment for a dangerous form of eye cancer, has raised $30 million in a series C round of venture financing.

The announcement follows Aura’s recent disclosure of positive results from animal studies, while interim data from an ongoing clinical trial of the technology is also described as encouraging. The company says it will use the latest funding round, led by new investors Lundbeckfonden Ventures and Arix Bioscience, to expand both its Cambridge base, and its infrastructure supporting clinical development.

Aggressive cancer
According to Aura, current radiotherapy options to treat the rare and aggressive form of cancer are associated with side effects including loss of vision, dry eyes, and radiation retinopathy. The alternative is removal of the entire eye – while such melanomas are known to spread to the liver in nearly half of patients, for whom five-year survival rates are very low.

“This novel therapy has the potential to selectively destroy cancer cells in the eye while preserving vision,” says the company of its treatment option, known as light-activated AU-011.

The basis of the approach is that virus-like nanoparticles modeled on the human papilloma virus selectively attach themselves to solid tumors and metastatic masses, without also binding to normal epithelial tissue that lines organs and blood vessels.

When conjugated with a photosensitizing dye and subsequently activated with an infrared-emitting ophthalmic laser, the nanoparticles are said to destroy cancer cells, without damaging the retina or other parts of the eye.

Aura’s CEO and founder Elisabet de los Pinos, who previously worked in Eli Lilly’s oncology business, said in a company release: “This year has been one of incredible momentum for Aura, with interim positive data reported from our Phase 1b/2 study of AU-011 and enthusiasm from key opinion leaders in ocular oncology across the country.

“We look forward this year to laying the groundwork for Phase 3 clinical development, furthering our commitment to enabling earlier treatment intervention for patients with ocular melanoma.”

Mark Chin, investment director at UK-headquartered new investor Arix Bioscience, added: “We believe that this timely investment will propel the company’s preparations for late-stage studies of AU-011, with the potential to provide a safe and effective therapy where plaque radiation or enucleation are the only options currently.”

Targeted therapies
While the initial focus in on ocular melanoma, Aura says it is also advancing its photodynamic approach for a variety of other cancers, including treatment of bladder, and head and neck tumors. It says that these forms of the disease show a high unmet medical need for better local targeted therapies that can eliminate problems associated with surgery and radiotherapy.

Among Aura’s prior investors is the company LI-COR Biosciences, whose products include the “IR-700DX” infrared dyes used in the targeted melanoma therapy, as well as a range of optical probes and fluorescent imaging equipment. LI-COR licenses this dye to Aura on an exclusive basis, for treating ocular cancers.

Aura points out that the laser activation element of the therapy can be delivered using equipment commonly found in the ophthalmologist’s office, and does not require a surgical procedure.

As well as pointing to a potentially less invasive, more convenient therapy for patients and doctors, this approach eases the path to clinical acceptance – something that has dogged other forms of photodynamic therapy, where the need to evaluate both new drugs and new equipment has made trials more complex and expensive to complete than more conventional treatments.