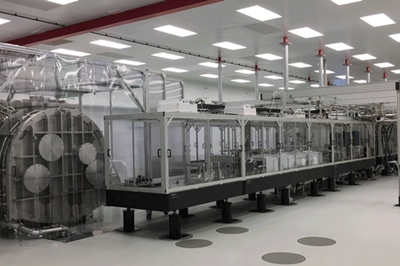 The HAPLS beamline in Prague

Engineers at the Extreme Light Infrastructure (ELI) Beamlines facility in Prague, Czech Republic, are in the process of installing four blocks of powerful laser diode units to complete construction of the “L3” line – a state-of-the-art laser system capable of delivering petawatt blasts at a rate of ten pulses per second.

Officially known as the High-repetition-rate Advanced Petawatt Laser System (HAPLS), the unprecedented light source was developed and built at Lawrence Livermore National Laboratory (LLNL) in California, before being shipped to Prague six months ago.

Once the Lasertel-developed diode sources are up and running, and delivering 800 kW pulses into the dual chirped pulse amplifier system, the full system will go into operation as the entire laser chain is tested.

And once those tests are completed, the L3 beamline should soon become available for initial user applications. ELI says that it is expecting the laser to serve as a compact particle accelerator for medical research, as well as a tool for laboratory-scale astrophysics studies, and a generator of short-wave X-rays for high-resolution spatial and temporal resolution microscopy.

“The initial experiments will be capable of taking images with resolution orders of magnitude better from what is seen in today's hospitals,” the ELI team reckons, with LLNL adding:

“In early 2018, the L3-HAPLS system's high energy pump laser will be gradually brought up to previous performance [demonstrated at LLNL], followed by ramping the petawatt beamline first in energy and then in average power.”

While other petawatt systems exist in various laser systems around the world, the most remarkable attribute of HAPLS is its ability to generate up to ten such powerful pulses every second.

That capability is a direct result of the diode pumping scheme, for which LLNL developed the world’s highest peak-power diode arrays and a specialized power system. The result is a pump laser delivering 200 Joule pulses at 10 Hz.

Beyond science
LLNL’s Constantin Haefner, who has overseen HAPLS development since LLNL and the Austrian ultrafast laser firm Femtolasers (since acquired by Newport and now part of MKS Instruments) were revealed as key contractors in early 2014, said in a statement from the US laboratory:

“L3-HAPLS is a quantum jump in technology. Not only did it allow LLNL to test and advance new laser concepts important for our mission as a national lab, it also is the first high-peak-power laser that can deliver petawatt pulses at average power - more than 1 megajoule per hour - entering the industrial application space.”

While the L3 installation was previously held up for a few months by problems with floor vibrations at the giant Prague site, ELI Beamlines officials have viewed the development as a reasonably straightforward one.

They describe the state-of-the-art system as a “workhorse” beam, whose repetition rate should dramatically speed up user experiments previously restricted to up to only a handful of petawatt pulses per day on even the most sophisticated equipment.