Photonics enables 'robot car' to drive itself over snow and ice 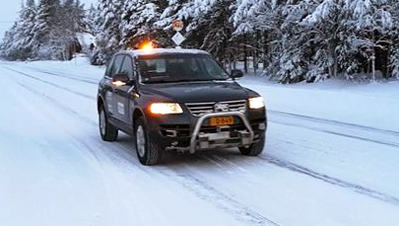 No skidding: Martti has achieved a new speed record of 40 km/h on snow and ice.

VTT Technical Research Centre of Finland has developed “Martti” – the first automated car to have driven itself fully autonomously on a real snow-covered road. The developers say their “robot car” has achieved a new speed record of 40 km/h on the Aurora E8 intelligent road in Muonio, northern Finland.

Martti is a research vehicle developed on the chassis of Volkswagen Touareg. Like its counterpart Marilyn, it is equipped with a variety of photonics- and optics-based equipment including cameras, antennas, sensors and laser scanners. The number and location of sensors differs between the vehicles. For example, Martti has three laser scanners sensing the environment only in front of the car, whereas Marilyn has two scanners looking forwards and one looking backwards.

Project manager Matti Kutila from VTT's RobotCar Crew explained, “When in spring 2017 we taught the automated car Marilyn to drive, this autumn it has been teaching us, the research team, how to design and program Martti such that it can get along with its spouse, and follow GPS and positioning information on its route. Martti, the newer version, has been designed for demanding weather conditions while Marilyn is specified as the queen of urban environments."

On the intelligent road of Muonio (see video, below), Martti was also given intensive training. "It clearly has a very determined mindset, and after a persistent 24-hour training session, it started to function,” added Ari Virtanen, in charge of building the car and its equipment. “Previously, Marilyn required a lot more development work, because its control software was created from scratch. Martti uses the same software, which did not need more than a few minor adjustments." 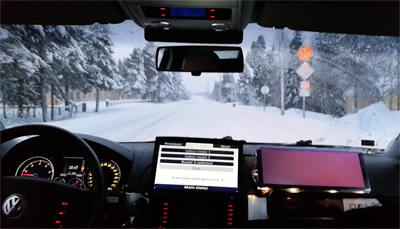 Icely does it: Martti safely motors along the E8 test route.

Martti achievd its speed record, when it was allowed to accelerate after sensing and controlling its own progress for a little while. "It probably also made a new world record in fully automated driving, making 40 km/h in a snowfall on snow-covered terrain without lane markings. It could have had even more speed, but in test driving it is programmed not to exceed the limit of 40 km/h," Kutila said.

The next step for VTT's autonomous cars will be changing the wavelengths of the optical components, increasing the resolution of the radar, and building more intelligence into the software monitoring the capabilities of the sensors. These developments are intended to enhance the vehicle's functioning capacity step-by-step also on slippery road surfaces, where a concealed road edge or fog may restrict visibility.

Different driving environmentss are being added all the time in the development of these autonomous cars, such as cities, main roads, snow, exit ramps, while increasing driving speed and managing more demanding weather conditions with increased intelligence.

Next, say the VTT developers, Martti will spend a well-deserved Christmas holiday, but Marilyn will be on call between Christmas and New Year, preparing for its first mission abroad: a trip to Germany in May. Before mid-January 2018, Martti will be equipped with communications modules that will allow it to communicate with separate digital transport infrastructure. So far it has been able to communicate with its spouse Marilyn only. 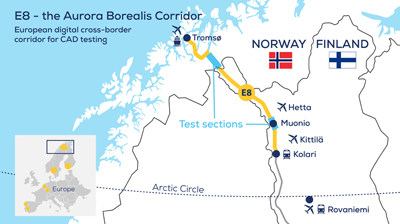 VTT's automated cars are intensely involved in the development of the 5G system, taking advantage of the opportunities it provides for automated driving through, for example, the 5G-SAFE project, which is part of the Tekes' Challenge Finland program. VTT is working in close collaboration with the European automotive industry in the development of automation for demanding weather conditions.

Kutila added, "We already have at our disposal an intelligent roadside unit, capable of feeding local information for the insatiable needs of Martti and Marilyn. This cart, called MARSU, contains measuring devices for friction data and a communications module serving as a base station. Furthermore, next spring one of our vehicles can also be spotted in forest environments, when Marilyn and Martti get a new friend capable of tackling all terrains.”

Video: ‘Snowbox’ instead of sandbox

The Aurora E8 experiments have been conducted as a part of the Artic Challenge-CAD project as a joint work between Indagon, InfoTripla and Dynniq. Aurora is developed in close collaboration with Borealis test ecosystem managed by the Norwegian Public Road Administration. Test sections of Aurora and Borealis share the E8 corridor, one of the corridors of European Union for cross-border testing of connected and automated driving. The following video explains the operation of the snow-friendly automated driving system: