US 'notably behind' in high-intensity, ultrafast lasers - report

A new report from the National Academies of Sciences, Engineering and Medicine (NASEM) has concluded that the US is “losing ground” in the area of high-intensity, ultrafast laser sources – the type now coming into use at Europe’s Extreme Light Infrastructure (ELI).

The NASEM report, penned by a committee chaired by Stanford University laser physics professor and PULSE Institute director Phil Bucksbaum, recommends that the US Department of Energy (DOE) puts together a plan to create “at least one” large-scale, open-access high-intensity laser facility in response to the findings.

“Currently, 80-90 per cent of high-intensity laser systems are overseas, and all of the highest-power research lasers currently in construction or already built are overseas as well,” points out the report, noting that research funding agencies in Europe and Asia have been investing heavily in new collaborations and facilities that promise to push the boundaries of laser technologies and their applications in manufacturing, medicine and security.

The most obvious recent example of that investment is ELI, the series of three giant new laser facilities in eastern Europe that have been made possible thanks to nearly €1 billion funding via the European Regional Development Fund.

While the US is home to some advanced and intense lasers – notably the 192-beam National Ignition Facility at Lawrence Livermore National Laboratory – the report’s global map of petawatt-class laser facilities indicates 30 such installations in Europe.

“It is clear that significant concentration occurs in Europe, owing principally to the self-organization of the various institutes and countries involved via European Union programs that have supported and brought a strategic aspect to the field over several decades,” wrote the NASEM committee. “The United States is notably behind.”

“The diverse range of technologies in development highlights the fact that PW-class laser development has garnered much support within Europe, and that funding exists to further develop and exploit these new technologies,” the authors add, drawing on details provided by John Collier, director of the UK’s Central Laser Facility. 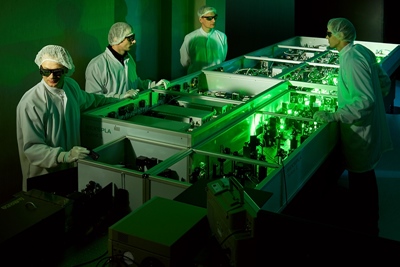 The report also points to the commercial activity that has emerged in Europe as a result of the wider investment in high-intensity lasers, contrasting it with a “particularly dire” situation in the US. It cites a proliferation of European laser companies including One-five, Femtolasers, Lumera Laser, Amplitude Systèmes, and Laser Quantum – while noting the irony that many of these startups have since been acquired by US-headquartered companies.

In addition to its recommendation for the DOE to convene a broad network across academia, industry, and governmental bodies to develop a national strategy for high-intensity lasers, the report urges better integration and co-ordination to determine the kind of laser parameters that would best serve research needs.

“The DOE should lead the development of a comprehensive inter-agency national strategy for high-intensity lasers that includes a program for both developing and operating large-scale laboratory projects; mid-scale projects such as those hosted at universities; and a technology development program with technology transfer among universities, US industry, and national laboratories,” states the report, adding:

“Agencies should create programs for US scientists and engineers that include mid-scale infrastructure, project operations in high-intensity laser science in the US, development of key underpinning technologies; and engagement in research at international facilities such as ELI."

It is also noted that the US would have one advantage over ELI when it comes to existing infrastructure, whereby new high-intensity lasers could be co-located with the various particle accelerators already in operation across the US.

December 14 briefing
Responding to the NASEM report, SPIE’s CEO Eugene Arthurs said that the conclusions echoed concerns that had been growing for as long as two decades over the relative lack of support for laser development in the US.

NASEM committee member and KMLabs founder and CEO Henry Kapteyn noted that the laser was originally the product of American innovation, and that if the more closely co-ordinated program envisaged in the report is implemented thoughtfully, it could help “recapture US competitiveness and jump-start American innovation” in the field.

Bucksbaum, Arthurs and others will speak at a briefing and panel session to further discuss the NASEM report’s findings scheduled for December 14. Co-ordinated by the NASEM and the US National Photonics Initiative (NPI), the “Reaching for the Brightest Light” event will take place from 4pm local time at the National Academy of Sciences Keck Center in Washington, DC.

• The full NASEM report Opportunities in Intense Ultrafast Lasers: Reaching for the Brightest Light can be accessed here. For details of the December 14 briefing and how to attend, visit the NPI web site.