Corning produces its one billionth kilometer of fiber 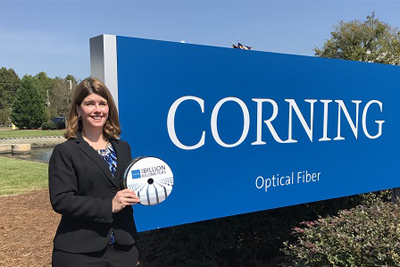 Fiber and optical materials maker Corning this week announced a significant milestone: delivering its one billionth kilometer of optical fiber. The company celebrated with an event at its optical fiber factory in Wilmington, NC, USA, which is said to be the world’s first optical fiber manufacturing facility, and remains one of the largest.

The company invented the first low-loss optical fiber in 1970, which helped launch the age of optical communications.

“The invention of optical fiber ushered in a communications revolution,” said Wendell Weeks, Corning’s chairman, CEO, and president. “This life-changing innovation began with a group of people who had the audacity to believe it was possible to transmit a beam of light down a hair-thin strand of silica with minimal signal loss.

”Yet in 1970, I don’t think even our most visionary scientist could have imagined the speed or carrying capacity of today’s fiber – or that Corning would one day be celebrating delivering our one billionth kilometer.”

In an increasingly connected world, optical fiber is the backbone of telecommunications networks. A single optical fiber link can carry 20 terabits of data per second – enough to support four million simultaneous HD video streams – and that capacity is growing. Optical technology has enabled instantaneous video downloads, online gaming, and always-on high-speed consumer services, as well as applications such as telemedicine, telecommuting, and "smart city" technology. 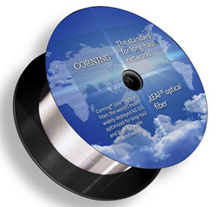 Corning’s press release announcing the billionth kilometre of fiber stated, “With its virtually unlimited bandwidth-carrying capacity, durability, and simple installation techniques, optical fiber will be critical in building next-generation networks and delivering the technologies to enable 4G densification and the transition to 5G, fiber-to-the-home amenities, and advanced business services.”

Today, the company remains the worldwide market leader and is the most widely deployed brand of fiber. Corning said it has reached the one billion kilometer milestone “through continued fiber innovation and deep customer relationships.” Aiming to keep its focus on the future, the company concluded that “it will continue to invest in its optical communications business to retain its leadership position.”