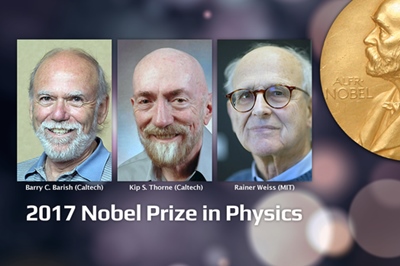 Three of the key scientists behind the first direct observation of gravitational waves with giant laser interferometers have won the 2017 Nobel Prize in Physics.

The Nobel committee awarded half of the prize and its SEK 9 million ($1.1 million) reward to Germany-born Rainer "Rai" Weiss from the Massachusetts Institute of Technology (MIT) and the LIGO/Virgo scientific collaboration.

Weiss is credited with coming up with the interferometry technique that in late 2015 was used to observe gravitational waves – vibrations in space-time created by violent cosmic events like black-hole collisions - for the very first time.

The other half of the prize was shared by the California Institute of Technology pair Kip Thorne and Barry Barish. Thorne came up with much of the theory used to predict the kinds of signals that gravitational waves would produce, while Barish is acknowledged as the scientific leader who brought the LIGO project to completion.

Forty-year effort
It took four decades and a huge investment to finally confirm Einstein’s century-old predictions, but the two LIGO facilities in the US, along with Italy’s Virgo interferometer, are now providing a completely new astronomical toolkit with which to observe the Universe.

The Royal Swedish Academy of Sciences, which awards the Nobel prizes, described the observation of gravitational waves as a “truly remarkable achievement”, adding:

“Einstein was convinced it would never be possible to measure them. The LIGO project’s achievement was using a pair of gigantic laser interferometers to measure a change thousands of times smaller than an atomic nucleus, as the gravitational wave passed the Earth.”

Responding to the Nobel announcement, Weiss predicted that future advances in detector sensitivity would see interferometers look deeper into the Universe, observing a wider range of cosmic phenomena including supernovae and the gravity-wave “background” created just after the Big Bang.

“It will be fascinating to see the earliest moments of the Universe,” Weiss said, adding in an MIT press conference: "[We've] opened up a new field of astronomy and astrophysics. The real pay-off will be in the future."

Humbled
Having received the customary call from the Nobel committee chair in the middle of the night, Barish added: "I am humbled and honored to receive this award. The detection of gravitational waves is truly a triumph of modern large-scale experimental physics."

He added: "LIGO is a prime example of what couldn't be done before. Although it was a very large-scale project, the challenges were very different from the way we build a bridge or carry out other large engineering projects. For LIGO, the challenge was and is how to develop and design advanced instrumentation on a large scale, even as the project evolves."

Thorne, who has admitted that he was initially skeptical that Weiss's interferometer designs would work, paid tribute to both of his co-laureates. "Barish, in my opinion, is the most brilliant leader of large science projects that physics has ever seen," he said, adding that Weiss's efforts were ultimately proved a "tour de force".

While their prize officially recognizes the work of three key scientists, the Nobel awarding committee acknowledged the team effort behind the LIGO and Virgo facilities, with upwards of 1000 individuals from 20 different countries now closely involved in the project.

LIGO's current executive director David Reitze added: "This prize rewards not just Kip, Rai, and Barry but also the large number of very smart and dedicated scientists and engineers who worked tirelessly over the past decades to make LIGO a reality."

Watch the MIT LIGO group break into applause as they watch the announcement of this years #NobelPrize in Physics ”…and the award goes to…” pic.twitter.com/c5tturvwgP

LIGO and Virgo
Only a week ago the LIGO and Virgo teams revealed details of the first gravity-wave event to have been observed by all three interferometers – enabling scientists to pin-point the area of the sky where the coalescence of two black holes took place much more precisely than is possible with just the two US detectors.

Incredibly, the very first direct observation of gravitational waves by the LIGO pairing in 2015 related to a collision between two black holes that took place 1.3 billion years ago – when the only form of life on Earth comprised single-cell organisms.

When the minuscule ripples in space-time generated by that collision reached Earth’s galactic neighborhood, the Large Magellanic Cloud, humans were only just starting to roam the planet as a new species in the form of Homo sapiens.

Two-hundred thousand years of evolution later, and humans had devised ways to detect the waveform of signals generated by the black-hole collision – thanks in large part to the invention of the laser in 1960.

Within a decade of the laser, Weiss had published work describing how a laser interferometer might detect Einstein’s predicted waves, while Thorne had begun his theoretical work on the topic.

“All three wanted to stress the role of the collaboration” - Olga Botner, member of the Nobel Committee, on the new Laureates' reactions. pic.twitter.com/s1diWiaRho

LIGO construction
By 1980 the US National Science Foundation (NSF) had funded a 40 meter prototype interferometer design, while a feasibility study suggested that a kilometer-scale system would be sufficiently sensitive to pick up gravitational-wave signals.

However, requests for funding to build such a system were rejected until the early 1990s, and even when LIGO did win significant backing some cash was withheld because of concerns over both project management and technical feasibility.

In 1994 Barish was appointed as the second director of LIGO, with the NSF reputedly offering the project one last chance when it pledged a record $395 million to support the construction of the twin facilities in Hanford, Washington, and Livingston, Louisiana.

Some 3000 kilometres from each other and on different US coastlines, the facilities would – if they worked – observe the same gravitational waves just milliseconds apart, as those waves rippled through and past Earth.

Completed in the late 1990s, the facilities were operational between 2002 and 2010. And although they were not able to observe any gravitational waves directly, the groundwork was laid for the “advanced LIGO” upgrade to more sensitive detectors.

Just days after the advanced LIGO setup was switched on for an initial observation run in September 2015, the first of four confirmed gravity-wave “events” was observed, and amid feverish speculation the results were officially released in early 2016.

Another sensitivity upgrade is already under way at LIGO and Virgo, while future possibilities include a European Space Agency (ESA) plan to build a much larger laser interferometer in space. The extra-long “arms” of such a space-based optical system will make it possible to observe gravitational waves at very different frequencies to the terrestrial facilities – meaning that scientists should be able to detect and analyze very different kinds of cosmic events.