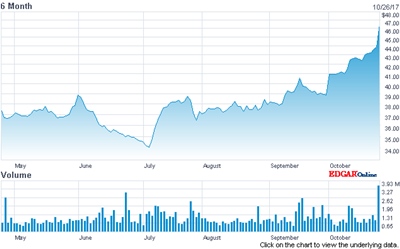 The stock price of FLIR Systems has risen to an all-time high after the thermal imaging and surveillance company posted rising sales and a record-breaking backlog in its latest financial quarter.

Jim Cannon, who was installed as FLIR’s new CEO in the summer, said that strong bookings momentum in the quarter drove order backlog to $709 million – the highest level in the company’s history.

Point Grey boost
A 20 per cent year-on-year rise in quarterly sales of commercial products was again boosted by the addition of Point Grey Research in late 2016 – with Cannon saying he was “absolutely thrilled” with the machine vision subsidiary’s performance and growth since then.

The CEO added that, even though growth in Point Grey business may slow a little in the near term, the FLIR team was “bullish” about the machine vision space, and the potential combinations with the thermal imaging technology that FLIR is better known for.

Point Grey was one of four acquisitions completed by FLIR in 2016, and with its strong balance sheet the company is intending to continue in that vein. Cannon and stand-in CFO Shane Harrison indicated that FLIR remained “very active” in assessing further deals to grow the firm.

Looking ahead, the CEO said that the closing quarter of the year would pose a few challenges, with some revenues pulled forward into the just-reported quarter. But he still expects FLIR to meet its full-year sales target of around $1.8 billion – compared with $1.66 billion in 2016.

“FLIR Method”
A US Army veteran who served in both the Desert Storm and Desert Shield campaigns in Iraq, Cannon also introduced the concept of “The FLIR Method”. The internal scheme is designed to increase profitability and cash generation, while from the start of 2018 FLIR will be structured around three business units instead of the current six.

Announced in September, that restructure will see FLIR’s results aligned to “industrial”, “commercial”, and “government and defense” sectors – a return to the kind of structure that prevailed before the company’s 2014 realignment around six key market-themed segments under previous CEO Andy Teich.

Elements of the “FLIR Method” include lean management and customer-driven innovation, with Cannon telling an investor call to discuss the latest thinking:

“Each of our business units will have dedicated FLIR Method leaders at various facilities globally, who will lead the focus on enhancing our productivity, refining our product pricing strategy, standardizing our core business terminology to better share best practices globally, implement expanded talent development programs, boost our acquisition and integration processes, and continue to develop world-class products that exceed our customers’ expectations.”

The new CEO also highlighted some of FLIR’s latest product introductions – including a new thermal bullet camera for perimeter security applications, a new drone camera with a hybrid sensor capable of in-flight switching between visible and thermal imaging, and a new suite of thermal imagers aimed at electricians and other trades.

• After releasing its latest results October 25, FLIR’s stock price rose 6 per cent to close at an all-time high of $46.52 – equivalent to a market capitalization of around $6.4 billion.