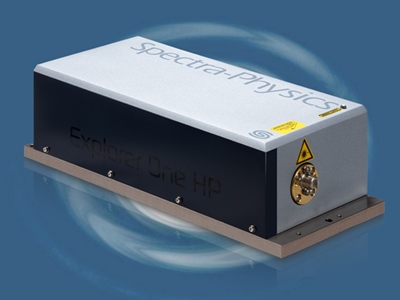 MKS Instruments, the Andover, Massachusetts, company that last year acquired Newport and associated brands including Spectra-Physics and Ophir, has posted record quarterly sales and a sharp increase in the profitability of its photonics business.

At $486 million, total sales were up 28 per cent on the same period last year, benefiting from the continued level of investment in semiconductor manufacturing equipment.

What MKS refers to as its “light and motion” division, which includes lasers, optics, precision control, beam profilers and power metrology, contributed $178 million to the third-quarter total – a year-on-year rise of 18 per cent, and up from $171 million in the second quarter.

“Surrounding the laser”
CEO Gerry Colella and his executive team attributed that jump to rising demand in both the buoyant semiconductor sector and in materials processing applications, where Spectra-Physics lasers are increasingly used in PCB and smart phone fabrication.

Colella pointed to a recent “eight-figure” order in Japan and another two major design wins in Korea as evidence of the strong performance. Since acquiring Newport in April 2016, the MKS executives have restructured the legacy sales approach, which was spread across multiple teams selling different optics-related products.

“We centralized the sales team under [single] leadership, and had a really strong view of surrounding the laser,” the CEO told an investor call to discuss the latest results. “[They] are doing better as a group than they would have done individually.”

Colella added that the well-known Spectra-Physics brand was central to the strategy, and that laser business would be a “growth engine” for the company over the next few years.

“I really believe that, and that’s the reason why we bought the company,” said the CEO.

That approach appears to be working well, with the added benefit of reducing the costs inherited with the Newport business. The profitability of the light and motion division has improved dramatically over the past year, said the MKS executives.

MKS’ plan is to increase the power of its diode lasers so that they can compete in the OLED sector, although plenty more product development will be required. One benefit is that other parts of the company’s operation, focused on vacuum and gas technology, already sell into the OLED production sector, potentially giving the company an opening in the future.

“We’ve been asked about the annealing process and it’s an interesting area,” said the CEO. “Raising the power of the lasers opens up more applications, and we’re working on that.”

Looking to the more immediate future, MKS said that continued strength across the semiconductor market would see demand from key customers like the wafer processing equipment giant LAM Research remain solid, with MKS' revenues in the closing quarter of the year expected to be between $480 million and $520 million.

While Colella and colleagues said it was too early to speculate about business developments in 2018, they did note that their major equipment semiconductor customers had told MKS to “be ready” for a further uptick in demand. 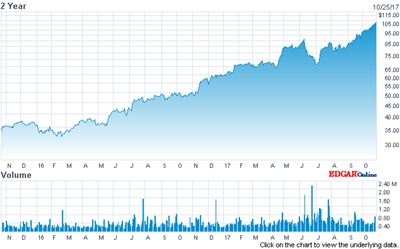 The strong performance on the top and bottom lines – MKS also posted record-breaking non-GAAP earnings and paid out a $9.5 million shareholder dividend during the quarter – means that it has been able to negotiate a better deal on the loan used to finance the Newport deal.

The company has also paid down a further $125 million of the $780 million originally borrowed, and at the end of September its debt balance stood at $448 million.

• Despite retreating slightly after the latest results, MKS’ stock price remains close to all-time highs. Trading at just over $101 on the Nasdaq exchange on October 25, it was down around 2 per cent on the prior close – but has more than doubled in value over the past 12 months.