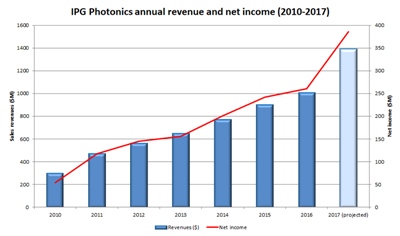 IPG Photonics’ sales of fiber lasers have risen sharply once again, with the Massachusetts company beating its own expectations and setting a new quarterly revenue record of $393 million in the three months ending September 30.

That total, driven by what CEO Valentin Gapontsev described as a “secular shift” to high-power products, represents a 48 per cent rise on the same period last year, and means that IPG has already posted sales exceeding $1 billion in only the first nine months of 2017.

IPG’s senior executive team highlighted how sales of fiber lasers delivering a power of 6 kilowatt or more had doubled year-on-year, thanks to customers looking for greater productivity in cutting and welding applications.

Bottom-line boost
The boom was reflected strongly on the bottom line too, with Gapontsev reporting net income of $116 million – up 67 per cent year-on-year – alongside news that full-year sales are now expected to be nearly 40 per cent higher than the 2016 total of $1.01 billion.

If that increase in full-year guidance is proved correct, it would represent IPG’s biggest rise in annual sales for six years, Gapontsev told investors. While rapid sales growth in the key Chinese market will have been widely expected, a jump of around 50 per cent in European sales, where 3D printing was a significant driver, appeared to back up claims of wider economic recovery in the region.

And despite the CEO’s warning that a slowdown in spending related to consumer electronics production would put the brakes on growth in the closing quarter of the year, investors reacted positively, sending IPG’s stock up to $215 on the Nasdaq exchange - more than double its valuation at the start of the year, and now equivalent to a market capitalization of over $11 billion.

Taking the drop in average selling prices into account, the CEO estimated that unit sales were up by as much as 70 per cent year-on-year – providing IPG with an ongoing challenge to meet customer demand.

Gapontsev said that thanks to its ability to source all key parts internally, the company had achieved that without any increase to lead times, which are said to have remained at around six weeks. 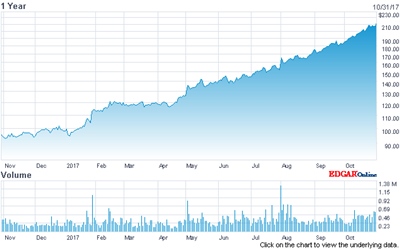 Opportunities knock
While neither he or CFO Tim Mammen is prepared to predict a precise rate of growth in 2018 at this point, Gapontsev remains confident of a substantial further uptick in business and is preparing to invest heavily once again to meet demand.

The CEO expects sales of laser systems and ultraviolet fiber lasers to take off next year, but sees a slower ramp of ultrafast sources for industrial applications.

Gapontsev says that the current market for such lasers is limited by the continued high price of sources he describes as too bulky and complex to be truly “industrial grade”. IPG is seeking to remedy that with its own line of ultrafast fiber lasers, with the CEO confidently predicting another “revolution” once the company is able to force down prices to a level suitable for mass penetration.

That could be in two or three years’ time, with IPG looking to ship tens of thousands of ultrafast units per year in the longer term.

Despite the huge rise in sales over recent years, Gapontsev and Mammen still believe that lasers in general – and fiber lasers in particular – have lots of headroom to grow into in the machine tool space, which they say remains dominated by old materials processing technology.

Although data in the field is sketchy, Mammen indicated that lasers have still only penetrated around 15 per cent of the overall market for machine tools, and that as the price of IPG’s lasers continues to drop the more advanced technology will start replacing antiquated punch-and-press equipment.

Gapontsev continues to regard the automotive market as an “enormous opportunity”, with additional momentum from the growing move to electric vehicles as cities look to phase out petrol and diesel engines, alongside wider adoption of lower-bodyweight cars made from aluminum and high-strength steels.

“It isn’t just the batteries, and it’s not just the bodies – we will benefit from both,” Mammen told investors, with applications such as fine cutting and welding of battery casings coming to the fore.