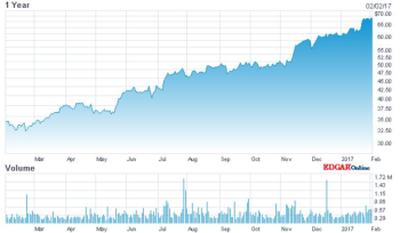 Fourth quarter and full-year 2016 figures from instrument and systems supplier MKS Instruments showed record sales numbers both overall and to the semiconductor trade, as the company continued to integrate the Newport laser business after the closing of its $980 million acquisition in the spring of 2016.

The company held $423 million in cash at the end of the year, and there was $627 million outstanding under its term loan.

CEO Gerald Colella described 2016 as a transformational year for the company, partly thanks to the ongoing integration with Newport which he said was proceeding very well.

"Exiting 2016 we have realized almost $20 million of synergies on an annualized basis," he said, referring to the acquisition. "We are tracking ahead of plan and are pleased to announce that we now expect to achieve total synergies of $40 million by the end of 2018, up from our previously announced goal of $35 million."

In subsequent discussions with analysts, MKS indicated that the $40 million was likely to be formed in roughly equal measure from improvements in operating expenses and growth in gross margin - the latter arising from adjustments to the supply chain within the MKS Light and Motion Division, under which its lasers and photonics interests sit. 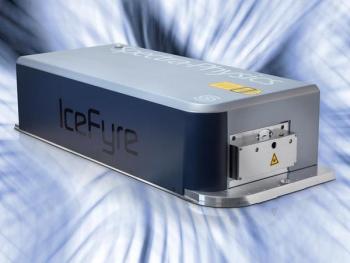 Partly as a result of the ongoing Newport integration and strength in the company's semiconductor markets, MKS is projecting sales figures for the first quarter of 2017 to fall between $385 million to $425 million.

Looking ahead, Colella stated that the acquisition of Newport had specifically allowed the company to expand its reach into additional semiconductor market segments including lithography, metrology and inspection.

"We have made a concerted effort to focus on key customers with the combined organization, to share roadmap and cross-sell our combined portfolio," he commented.

Colella also spoke of untapped opportunity for the company that was now available outside the semiconductor sector, and revenue streams arising from potential increases in infrastructure spending, military spending, and the tapping of natural resources. "Those all look like good opportunities for increased growth across multiple business uses in the company," he said.

MKS shares dipped when markets opened after the quarterly announcement, but recovered to finish nearly unchanged from the previous day. Since the Newport acquisition, the MKS share price has risen consistently, increasing by around 90 percent.

•  At Photonics West, MKS's Spectra-Physics business unit introduced a high-power picosecond hybrid fiber laser christened IceFyre.The 1064 nm platform is targeted at applications including glass and sapphire cutting, semiconductor scribing and dicing, and the processing of PCBs and ceramics, according to the company. It also integrates the Timeshift technology developed by Spectra-Physics to allow programmable laser-pulse profiles.