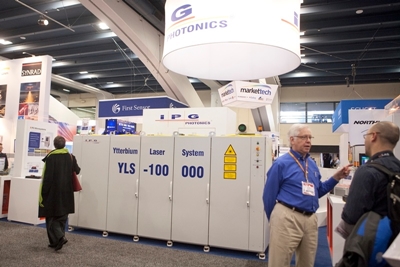 Fiber laser maker IPG Photonics has indicated that its full-year sales for fiscal 2016 are likely to top $1 billion for the first time, sending the company’s stock price up 10 per cent in the process.

Estimated at $280 million for the fourth quarter, the sales total beats the prior guidance of between $255 million and $270 million. Added to the $726 million posted for the first nine months of the year, it tips the annual figure just over the billion-dollar mark.

Announcing the preliminary figures on the eve of the SPIE Photonics West exhibition taking place in San Francisco, IPG added that a benefit from foreign exchange had also helped to boost profits.

IPG’s CEO and founder Valentin Gapontsev said in a statement from the Oxford, Massachusetts, firm: “We are extremely pleased to have achieved this landmark revenue level in the quarter that marks our tenth anniversary as a public company.”

He added that the approximately 25 per cent year-over-year increase in fourth-quarter revenue compared with the closing three months of 2015 was primarily driven by the continued strong demand for lasers in materials processing applications.

“Geographically, we saw our strongest growth in Asia and Europe,” said the CEO. “In terms of products, growth was primarily driven by high-power fiber lasers, QCW lasers, pulsed lasers and amplifiers used in telecommunications applications.”

The company, which is exhibiting its broad portfolio of lasers at this week’s Photonics West event, is set to provide a full update of its latest financial year, along with an update on its future strategy, on February 14.

• On release of the update, IPG’s stock price jumped in value by around 10 per cent. Trading at around $115 on January 31, the company now commands a market capitalization in excess of $6 billion.