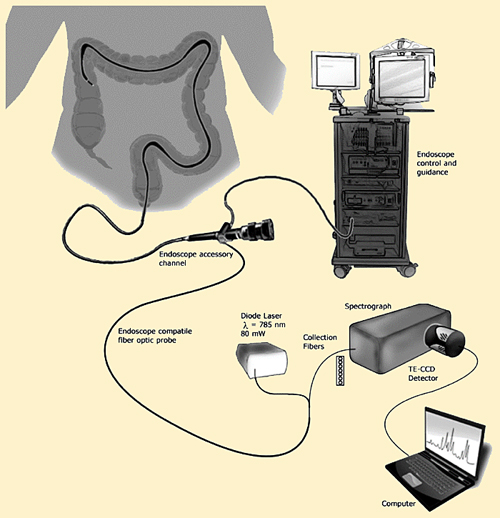 US researchers led by Vanderbilt University, TN, have developed the first sensor that can objectively identify inflammatory bowel disease (IBD) and distinguish between its two subtypes. They say the special endoscope “represents a substantial achievement toward a more personalized approach to diagnosing and treating IBD, a chronic inflammation of the gastrointestinal tract affecting more than two million Europeans and one million Americans each year”.

The work has just been reported in Biomedical Optics Express, which states that current diagnostic and treatment procedures for IBD are inexact and rely largely on trial and error. The article also reports on a pilot study of a custom-developed endoscope that uses Raman spectroscopy to detect molecular markers of IBD in the colon.

The sensor is a minimally-invasive probe that can be easily integrated into a routine colonoscopy exam. After further refining, the researchers say doctors could use the device to help diagnose IBD and evaluate a patient’s response to treatment.

“With current methods, ultimately the diagnosis is dependent on how the patient responds to therapy over time, and you often don’t know the diagnosis for a few years,” said Prof. Anita Mahadevan-Jansen of Vanderbilt University, senior author of the paper, who initiated the project after a personal experience with IBD. “That’s why we decided to use a light-based method to probe the biochemistry of what’s going on in the colon. Our goal is to use Raman spectroscopy to look at the actual inflammatory signals.”

IBD occurs in two subtypes: ulcerative colitis (UC), which is typically confined to the colon, and Crohn’s disease, which can occur in any part of the gastrointestinal tract. They can cause similar symptoms such as severe diarrhea, pain, fatigue and weight loss, yet the two types respond differently to treatments, which include drugs, dietary interventions and surgery.

Doctors currently use a combination of clinical, radiologic and pathological methods to diagnose a patient’s IBD subtype and guide treatment decisions, but these methods detect symptoms, rather than the underlying source of disease, and the process has lacked an objective “gold standard”, said Prof. Mahadevan-Jansen. As a result, up to 15 percent of patients are diagnosed with indeterminate colitis, meaning the subtype is unknown, and an additional 5 to 14 percent have their IBD reclassified based on how they respond to treatment.

“Most people go through baseline colonoscopy as part of routine care, and you could imagine using this [new approach] to get a baseline Raman signal for each person,” said Mahadevan-Jansen. “If someone presents with IBD symptoms later on, you can use our system again to determine if it’s more likely to be UC or Crohn’s. Then once they are being treated, you have an objective measure to track their response because you can use the device to actually quantify mild, moderate or severe inflammation.”

To develop the probe, the researchers first used tissue samples and animal models to identify preliminary biomarkers and spectral signatures consistent with IBD. They then custom-built a portable Raman spectroscopy system with a 785nm diode laser and fiber-optic probe that delivers 80mW to the surface of the colon. 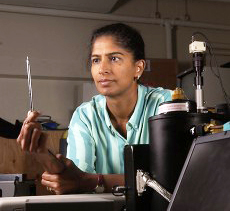 Prof. Mahadevan-Jansen commented, “The customization was both the packaging – to make sure it can fit easily in the endoscopy channel and bend through the turns of the colon – and to probe the right depth in the tissues we are looking at to make sure we can get a robust measurement.”

Raman spectroscopy has been previously applied in the gastrointestinal tract for cancer detection, but using it to measure markers of inflammation poses some unique challenges because the signals are far more subtle. This necessitated special engineering, for example, to include filters that eliminate the Raman signature produced by the components of the probe itself.

In their pilot test, the researchers used the device in 15 patients with an existing diagnosis of Crohn’s disease, eight patients with UC and eight healthy volunteers. In general, the results suggest high sensitivity but poor specificity though results vary depending on the degree of inflammation and where the measurement was taken. When measuring the right colon in patients with active inflammation, the device detected Crohn’s disease with a sensitivity of 90 percent and a specificity of 75, compared to 86 percent and 39 percent, respectively.

The researchers are now focused on refining a set of algorithms that help doctors interpret test results for a given patient. To improve the test’s specificity, the team is analyzing data from an expanded cohort of patients to discern how factors such as gender, diet, demographics and treatment regimen influence the Raman signature. Ultimately, they envision a system that combines key information about the patient with Raman spectra to deliver tailored results that can inform a diagnosis or help track a patient’s response to treatment.

The researchers are also pursuing studies in animal models to further understand the sources of various molecular signals, identify the types of changes that can be expected as a result of treatment and determine whether the device could be used to detect IBD or risk factors at even earlier stages.