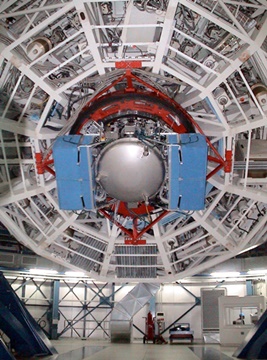 The European Southern Observatory’s (ESO’s) Very large Telescope (VLT) is set for an optics upgrade to search for “nearby” exoplanets that could eventually become targets for future space probes.

Paid for by a private backer in the form of Breakthrough Initiatives – the program of space-related technological exploration bankrolled by Russian physicist-turned-Internet-billionaire Yuri Milner – the upgrade will include a mid-infrared adaptive optics system, with plans for a new coronagraph.

AO for VISIR
According to ESO, while the future European-Extremely Large Telescope (E-ELT) will be able to study Mars-sized exoplanets orbiting relatively nearby stars, the VLT upgrade should be just sufficient to view any exoplanets around the three-star Alpha Centauri system – our own solar system’s nearest stellar neighbor.

The agreement with Breakthrough Initiatives, signed by ESO’s director general Tim de Zeeuw, provides funds for modifications to the VLT Imager and Spectrometer for mid-Infrared (VISIR) instrument, plus telescope time pencilled in for 2019.

First installed on the VLT in 2004, VISIR operates in the so-called “N-band” (8-13 µm) and “Q-band” (16.5-24.5 µm) wavelengths. Because this long-wavelength light propagates through dust much better than visible and near-infrared light, it enables astronomers to see through otherwise dark patches of the night sky caused by giant clouds of interstellar dust.

And although imaging in the mid-infrared region is challenging because of all the thermal noise generated by instrumentation and even the Earth itself, the difference in brightness between a host star and an orbiting planet at these wavelengths is much lower than in the visible spectrum.

“The existing mid-infrared instrument VISIR on the VLT will provide such performance if it were enhanced to greatly improve the image quality using adaptive optics (AO), and adapted to employ a technique called coronagraphy to reduce the stellar light and thereby reveal the possible signal of potential planets,” ESO explains.

“Breakthrough Initiatives will pay for a large fraction of the necessary technologies and development costs for such an experiment, and ESO will provide the required observing capabilities and time.”

ESO's Markus Kasper told optics.org that the mid-infrared AO approach would use exactly the same principles as regular AO, although in the case of Alpha Centauri instead of laser guide stars the star itself would be used for wavefront sensing. "There are no other thermal [N-band, 10 µm] imagers equipped with AO today," he added. 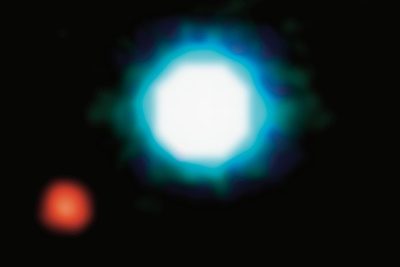 Speculative hunt
The new hardware includes an instrument module contracted to Munich, Germany-based Kampf Telescope Optics (KTO). The module will host the wavefront sensor and a novel detector calibration device. In addition, there are plans for a new coronagraph to be developed jointly by University of Liège in Belgium and Sweden’s Uppsala University.

Because the project is so speculative - according to Kasper, there is less than a 50/50 chance of the upgraded instrument locating an exoplanet in the Centauri system – the upgrade is unlikely to have ever been financed with conventional grant funding mechanisms. "It is unprecedented for ESO," he said.

However, the recent discovery (using another ESO telescope) that Proxima b, an Earth-sized planet in the “habitable zone”, is orbiting Proxima Centauri - a red dwarf that is the faintest star in the system – has added impetus to the search for similar worlds.

"It is a gamble," Kasper added. "The probability for exoplanets in the habitable zone are not well constrained by the currently available data (mostly from the Kepler satellite). Current estimates are around a 20 per cent chance for a solar-type star, so of the order 36 per cent considering that we observe two stars, Alpha Centauri A and B. For such a binary, there is however observational evidence that planet formation rates are reduced. So we are talking about 10-20 per cent probability of success with large uncertainty."

Whether or not it is successful, ESO says that the VISIR upgrade should at least prove beneficial for a similar instrument called “METIS” that will be mounted on the E-ELT, with the knowledge gained and proof of concept expected to be directly transferable.

“The huge size of the E-ELT should allow METIS to detect and study exoplanets the size of Mars orbiting Alpha Centauri, if they exist, as well as other potentially habitable planets around other nearby stars,” says ESO.

Not only will METIS be able to see such exoplanets; it should also be able to investigate the Martian atmosphere, distant “brown dwarf” stars, and gamma ray bursts, among other phenomena.

Laser-powered nano-probes
If VISIR or METIS is able to locate more Earth-like or Mars-like planets in the Alpha Centauri system, the Breakthrough Initiatives project ultimately wants to try to reach them with laser-powered miniature probes.

While engineering details are sketchy to say the least, in principle a high-power laser could accelerate a tiny, lightweight, yet resilient probe to a velocity of around a fifth of the speed of light – suggesting that, at a distance of “only” four light years, the Alpha Centauri system might be reached within a 20-year timescale.

“Knowing [exactly] where the nearest exoplanets are is of paramount interest,” reported Breakthrough Initiatives, which has dubbed the laser-powered probe its “StarShot” project.

The same group is behind the “Breakthrough Listen” effort, launched in 2015 as a decade-long hunt for advanced extra-terrestrial life with elements including a search for optical laser transmissions.