by Matthew Peach in Edinburgh 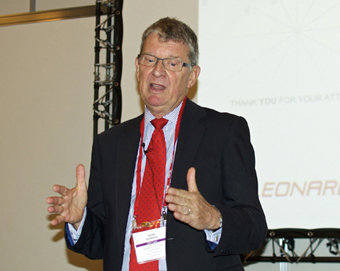 Sir Brian explains how to exploit photonics technologies for ISR.

The “Industry Session” strand of this week’s Security + Defence / Remote Sensing conference in Edinburgh, opened this morning with a keynote presentation by a speaker who ticks all the right boxes: familiarity with manufacturing of photonics-based systems for defense, substantial personal experience of using such; and a leading role in defense policy-making.

He told the gathering at Edinburgh International Conference Centre, “I want to give you a perspective on the industry’s ability to be agile and how to exploit commercially the technologies based on ISR – intelligence surveillance and reconnaissance.

“The reason I’m here is because of my role as the chair at the UK Defense Solutions Partnership, which is a Government-industry partnership aimed at sustaining and developing defense-industrial related business and exports.

The UK’s Defense Solutions Partnership brings together interested parties in industry and defense-related technologies, to better understand what’s happening in the sector, to gathering information and consider developments, both technical and commercial.

Sir Brian continued, “I’m just entering my fiftieth year working in this sector, a lot of which was spent in active military operations. My experience has crossed the Cold War and the post-Cold War period, during which time the nature of military operations and defense problems have changed profoundly. So the capability requirements have also changed, too.”

He added, “Capability in military terms is about platforms, weapons, sensors and systems and the balance between those four things is interesting – to see how it has shifted, particularly in the past 15 years. Because if you think about a fast airplane, we are at the limit of physics between the engine-airplane combination, whereas in the sensors, systems and software areas there is still plenty of scope for development.”

Sir Brian went on to describe how the UK military’s recent experience of “asymmetric combat” in theaters such as Iraq and Afghanistan had prompted the need for systems that enabled rapid responses to attacks on its forces: “As we got into the groove of counter-insurgency, we realized that we need to be able to deal with time-sensitive targets and to ultimately be able to deal with such things in single-digit-minutes: from intelligence receiving news of a hit to putting a weapon on that threat.”

The direction of travel, he said, is to refine sensing capabilities by developing systems that can achieve smaller and smaller pixel sizes and higher resolutions – to accurately determine what is a threat and a target and whether action is necessary, to maximize safety of friendly forces while minimizing the possibility of collateral damage to non-combatants.

Already for Leonardo, such technologies generate UK export sales of around £7.5 billion ($9.8 billion) per year, into the estimated £200 billion annual defense market place. To support this endeavor, Leonardo invests around £1.2 billion or around 12% of its turnover.

With both the market and the systems developer community in mind, Sir Brian ended his presentation with the following conclusions: the user [military market] needs greater system performance; the supply side needs greater funding opportunities; and there needs to be greater protection for high-tech intellectual property.

”To capitalize on this opportunity,” he said, “developers need to apply a systematic, codified and evidence-based approach; but I believe we are operating in an era of opportunity.”