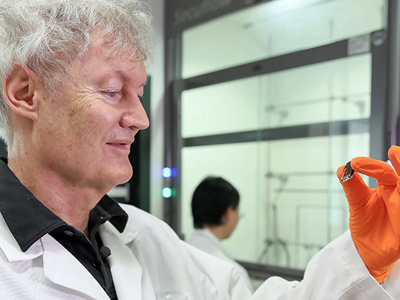 Professor Michael Grätzel, a German scientist who has long worked at EPFL, Lausanne, and who is known as the “father of artificial photosynthesis", has once again been lauded for his outstanding contributions to the field of energy and electron transfer reactions and their use in energy conversion

Scientific publisher Elsevier, and the editors of its journal Chemical Physics Letters, have announced that the 6th Ahmed Zewail Prize in Molecular Sciences is awarded to Professor Grätzel for “his contributions in efficient solar light harvesting and its conversion to energy”.

Professor Grätzel pioneered research in the field of energy and electron transfer reactions in mesoscopic systems and their use in energy conversion systems, in particular photovoltaic cells and photo-electrochemical devices for the splitting of water into hydrogen and oxygen and the reduction of carbon dioxide by sunlight as well as the storage of electric power in lithium ion batteries.

He discovered a new type of solar cell based on dye-sensitized nanocrystalline oxide films which successfully mimic the light reaction occurring in green leafs and algae during natural photosynthesis. Dye sensitized solar cells are produced by industry and sold commercially on the megawatt scale as light-weight flexible cells for powering portable electronic devices and as electricity producing glass panels for application in building integrated photovoltaics.

The DSSC has engendered perovskite solar cells (PSCs) that have revolutionized the whole field of photovoltaics reaching over 22% efficiency only a few years after their inception. This exceeds the performance of polycrystalline silicon solar cells. 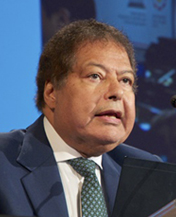 The Ahmed Zewail Prize in Molecular Sciences is a biennial award presented by Chemical Physics Letters. Named for the journal’s Honorary Advisory Editor Professor Zewail, who received the 1999 Nobel Prize in Chemistry, the Prize is awarded to individual scientists who have made significant and creative contributions of a fundamental nature to any of the disciplines of molecular sciences. The Prize consists of a monetary award of $20,000, a Gold Medal and a certificate. Prof Zewail died in August 2016 [obituary].

Sir David Clary, Editor of Chemical Physics Letters, commented, “Michael Grätzel has made exceptional contributions to the field of energy and electron transfer reactions and their use in energy conversion. He applied basic principles of chemical physics, which lead to the development of new solar cells and batteries. Our esteemed colleague Ahmed Zewail, who sadly passed away just two months ago, would have been very proud of the award in his name to such an outstanding chemical physicist.”

Professor Grätzel will receive the Prize at special symposium during the Femtochemistry Conference (FEMTO13), 13-17 August, 2017 taking place in Cancun, Mexico.