Now in its 21st year, the European Conference on Optical Communications expo, which has just closed in Düsseldorf, brought together an estimated 5000-plus delegates from around the world.

Highlights of this year’s event included an exhibition with more than 300 exhibitors, packed with interactive features, working systems and expert-led seminars. Live demonstrations were made in the FTTx Village and free training sessions covered industry activities fromfiber-splicing to software applications.

Besides this, there was the annual gathering of optical comms academics in their 42nd conference (the event was a technical meeting long before it became an exhibition). The seven-strand program of talks included topics ranging from fibers, devices and amplifiers, through waveguides and optoelectronic devices to subsystems for optical networking and the current hot topic of of data center networks.

Reflecting the widespread comments that the optical communications industry is currently enjoying a period of renewed growth and interest, ECOC’s Market Focus, the exhibition-based conference that allows exhibition visitors to drop in without leaving the showfloor, was almost permanently standing-room only over the three days.

Monday’s morning session opened with analyst Kevin Lefebvre, of Ovum, as well as speakers from II-IV Photonics, Cignal AI and OFS, who together covered a range of topics related to “service provider optical transmission”. Then the focus switched to photonic integration and digital silicon photonics, with Vladimir Kozlov, of LightCounting, and Huawei’s Maxim Kuschnerov considering the impact of silicon photonics technology on the global optical market. Speakers from Lightwave Logic, Intel and Acacia Communications the addressed the topics of “siliconization of coherent transceivers” and “future of optical connectivity within data centers”.

On Tuesday, the key early themes discussed at the Market Focus included software defined networks (SDN), ultrafast fiber access and the likely impact of the arrival of 5G. So-called “network virtualization” appeared to be a hot topic of day two, reflected in several sessions. The Optical Internetworking Forum’s Nathan Tracy discussed how to make the most of SDNs, and on the same topic, Deutsche Telekom’s Matthias Gunkel described the company’s SDN implementation strategy in the IP core. Next up, was the agility of optical networks and packet optical transport, featuring Nokia’s Samuel Liu and Cisco’s Wolfgang Fischer.

This year’s Market Focus saw more attendees than ever before, according to the show organizer, and third day of presentations (with “the Cloud” to the fore), saw some of the show’s biggest names presenting. Notably, Facebook’s Katharine Schmidtke discussed the key role energy efficiency has in the cloud environment as bandwidth demands continue to grow. Her session was one of the best attended of the entire exhibition, with delegates clamoring to hear how Facebook is “revolutionizing the scale of optical and electrical interconnects in the data center”. 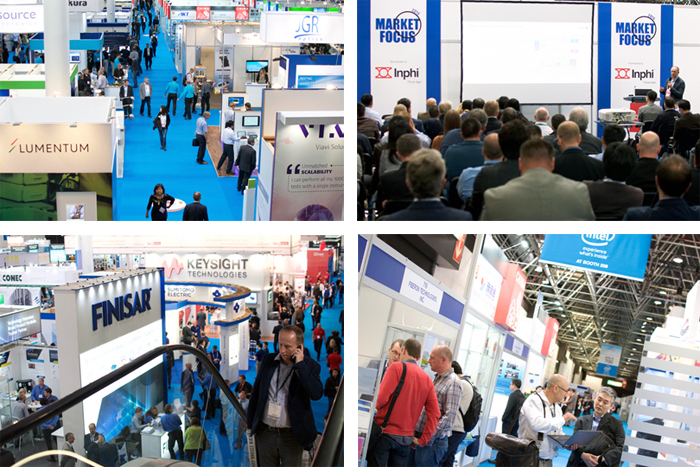