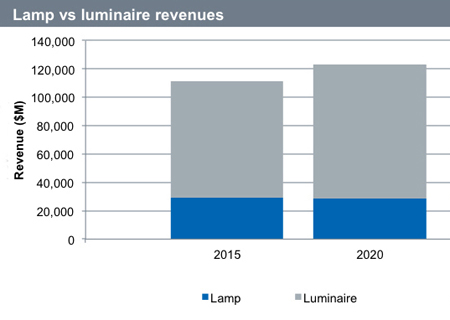 Worldwide sales of lighting equipment grew by 4.6% in 2015, according to a new market report from IHS Markit. This rate was slightly lower than that observed in 2014, when revenue grew 4.8%. The analyst commented that behind the overall growth rate of 2015, there are two distinct – although interlinked – stories.

Firstly, lamp market revenue grew 4.0% in 2015, which was lower than that ector’s 7.3% revenue growth in 2014, but above previous longer-term IHS Markit revenue forecasts through 2023. The firm notes, “As the lamp market continues to transition to LED, there are two effects combining to mute future revenue growth: an overall decline in lamp shipments, and price erosion of LED lamps.”

Paul Bremner, senior analyst, said, “As customers switch to LED technologies that have much longer lifespans than traditional technologies, fewer replacement lamps are required, resulting in lower shipment levels. And as prices for LED lamps fall, manufacturer revenue will also begin declining in 2019.”

The second significant factor is that luminaire revenue grew 4.8% in 2015, which was higher than the 3.9% growth noted in 2014. Unlike the lamp market, luminaire revenue growth is expected to continue over the forecast period. “This growth comes from LED integrated and LED replacement luminaires, which will see continued growth in both revenue and shipments through 2023,” Bremner added.

Further new global and regional market statistics, forecasts and market share estimates were recently added to the IHS Markit Lighting Intelligence Service. In addition to the above, other key findings include the following: 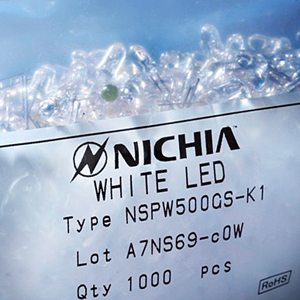 Nichia led in lighting and mobile applications for 2015, with 12.9% share.

As the same time as the lighting report, IHS Markit also published its annual revenue-share ranking of the top LED suppliers for backlighting, automotive, lighting and other applications, based on 2015 sales. According to the 2016 edition of the IHS Markit Packaged LED Report, Nichia led in both lighting and mobile applications for 2015, with 12.9% share of the total packaged LED market. Nichia was followed by Osram and Lumileds which had a combined share of 14.7%.

Alice Tao, senior analyst, LEDs and lighting for IHS Markit, commented, “It’s no surprise that Nichia led in more than one application. In 2015, Nichia overtook Cree, which led the lighting category in 2014. Nichia was also strong in mobile phone LEDs, since the company is a major supplier for Apple’s iPhone.”

Samsung was the leading supplier in backlighting, which includes LEDs for in TVs, monitors, notebook PCs and tablet PCs. Nichia followed in second position and LG Innotek ranked third. Osram has been the leading supplier of automotive LEDs for many years. Its market share was 35% in 2015 for LEDs used in the total automotive market and 40% for those used in the automotive exterior market. It also led in the “other” category, which includes LEDs used for industrial, medical, security, projection, signage and off-specification applications.