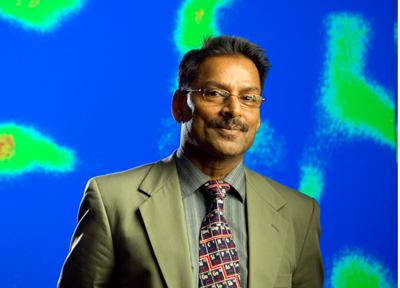 University at Buffalo, NY, researcher Paras Prasad was this week awarded the SPIE 2016 Gold Medal during SPIE Optics + Photonics at a gala awards banquet in San Diego, Ca. The award recognizes Prasad’s pioneering contributions to nano- and biophotonics and their significant medical applications. His lab has developed nanoparticle technology capable of conducting cellular, tissue-level, and whole-body imaging, and delivering drugs inside the body.

Prasad is a Distinguished Professor of Chemistry, Physics, Medicine and Electrical Engineering and the Samuel P. Capen Chair as well as Executive Director of the Institute for Lasers, Photonics and Biophotonics at the University at Buffalo State University of New York. He was an early pioneer in light-based nanomedicine, which involves using tiny light-activated particles for diagnosis, monitoring, and treatment of disease.

The award recognizes his lab’s development of Nanoclinic, a silica nanoshell containing various diagnostic and therapeutic agents, and his numerous other pioneering contributions to nonlinear optics, nanophotonics, and biophotonics and their application to nanomedicine, along with his three-plus decades of outstanding service to SPIE.

The award was presented along with others at an annual awards banquet on 31 August. Recipients of the 2016 SPIE President’s and Directors’ awards were also announced during the banquet, hosted by SPIE 2016 President Robert Lieberman, of Lumoptix LLC.

Earlier this week, Prasad gave a symposium-wide plenary presentation on his latest research, into photon management through in situ photon conversion with optical nanotransformers. Prasad and his team have created nanotransformers for functional imaging of brains and for optogenetic stimulation of brain activity — an extension of the Nanoclinic technology.

Nanoclinic is a multilevel nanoparticle containing imaging and sensing probes capable of conducting cellular, tissue-level, and whole-body imaging. It can also house a therapeutic payload, enabling doctors to release drugs inside a patient’s body and monitor the effectiveness of the treatment in real-time.

"Professor Prasad’s discoveries in nanomedicine have great potential and could lead to breakthroughs in detecting, diagnosing, and treating various forms of cancer,” said Venu Govindaraju, vice president for research and economic development at UB. “His work also demonstrates how university researchers can drive innovation and economic development.”

In shaping the fields of nanophotonics, nanomedicine, and biophotonics, Prasad has helped open up a critical new frontier in science and technology. “These seminal contributions have life-changing implications, from cancer treatment and drug delivery to imaging and information storage,” said UB President Satish Tripathi.

“The SPIE Gold Medal is a prestigious international honor and a much-deserved recognition for Dr. Prasad, who has made profound contributions to the fields of optics and photonics over many years,” Tripathi added.

Prasad, a member of SPIE for more than 30 years, has developed and taught courses for SPIE in nonlinear optics, nanophotonics, biophotonics, and nanomedicine, chaired the Nano/Biophotonics track at BiOS at SPIE Photonics West, and presented and published numerous papers in SPIE journals and conference proceedings.