Studying how OLEDs are tolerated by organic cells could benefit light therapy and medical applications. 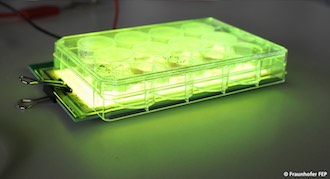 Bio-friendly: how do cells react to OLED light and to OLEDs.

The Fraunhofer Institute for Organic Electronics, Electron Beam and Plasma Technology (Fraunhofer FEP) has carried out cytocompatibility studies of organic light-emitting diodes, to investigate how well OLEDs are tolerated by living cells.

No such studies into OLED compatibility are thought to have been carried out previously, according to the project team, which will present its findings at a FEP Industry Partners Day in late September 2016.

The beneficial effects of exposure to incident light on organic tissues are well known, and have made light therapy an attractive way to promote wound healing and recovery, including for chronic or infected wounds where other therapies may be less convenient.

LEDs and flexible OLEDs represent a potentially valuable way to create suitable sources for such light-based therapy and other related medical applications, so the exact effects of the OLED materials and structures themselves on tissues is one key concern for developers.

"We need long-term studies to be able to guarantee cytocompatibility during exposure to OLED light," commented Christian May of Fraunhofer FEP. "Safe electrical connections, power supplies, control circuitry, and component perimeter seals are important aspects that we are dedicating ourselves to, before direct application to the patient is allowed."

No harm done
According to the project's preliminary white paper, its studies looked at the response of cell cultures taken from samples of the human skin (fibroblasts and keratinocytes) and of the immune system (human T-lymphocytes) to green and cold-white OLED light. The vitality and mitochondrial membrane potential of the cells was measured following the treatment with light, in order to assess what the effects had been.

Results indicated that a positive stimulation of damaged cell cultures of the upper epidermal layer by green light had taken place, suggesting a possible route to future therapeutic applications if the preliminary findings are borne out.

Crucially, the study also examined the potential effects of toxic substances that may diffuse from the OLEDs due to electrical operation or mechanical loading, which could in turn impact the shape, the number, and metabolism of cells. Comparative studies and long-term tests showed no cytotoxicity in the material systems investigated, although the white paper notes that additional long-term studies are now anticipated in order to guarantee the findings.

"Even after electrical operation and exposure to mechanical loading by bending, no toxic substances able to alter cells diffused from the OLEDs," commented Jessy Schönfelder of the Fraunhofer FEP Medical Applications Research Group.

Fraunhofer FEP said that it continues to seek additional interested partners for applications-oriented product development related to this work.

• A joint project to develop processes and technologies for the manufacture of flexible OLEDs christened the R2D2 project and involving Fraunhofer FEP, Audi, Novaled, Osram and others has recently concluded.

Fraunhofer's Christian May commented that the project "has brought OLED technology in Germany a good deal further. Flexible OLEDs in innovative lighting solutions will be coming onto the market in the near future. Other sectors will follow suit. There are already prospective designs for household appliances and even for aircraft over the long term."