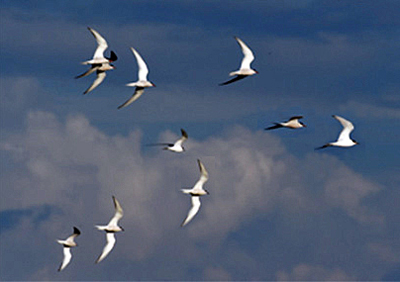 New research at Lund University in Sweden shows that the flight speed of birds is determined by a variety of factors. Among the most sensational is that the size of the flock has a significant impact on how fast the birds can fly. The larger the flock, the higher the speed.

Researchers at the Faculty of Science in Lund have now shown how several factors, working simultaneously together, determine the birds’ flight speed. Their morphology, that is, the bird’s weight and the shape of its wings, is one factor; wind direction and speed is another; and the situation (such as searching for food or travelling long distances) is a third.

However, what surprised the researchers the most was that the flock size has a major impact on the birds’ speed. “I was surprised that it is such an important factor. It has usually been neglected in studies of bird flight”, says Professor Anders Hedenström, who conducted the study together with Professor Susanne Åkesson.

This is the first time that researchers have successfully proven that the flight speed increases as the flock becomes bigger. The measurements were taken on the Swedish island Öland, where the researchers evaluated the birds’ morphology and counted the number of birds in different flocks.

Subsequently, with the help of an ornithodolite – a measuring instrument that can be described as a telescope with a laser rangefinder that also records the speed and direction, as well as the height and side-angle of the wind – they were able to measure the speed of various large flocks.

The result is clear: bigger flocks travel faster, no matter what species they belong to. What remains unclear is why. One theory is that in large flocks, there are more heavy birds, which fly faster than those that are lighter. In a large flock, it is easier to take advantage of the turbulence that occurs behind other birds, especially when flying in formation, like geese and other birds do. Utilising the turbulence makes it easier to maintain higher speed. 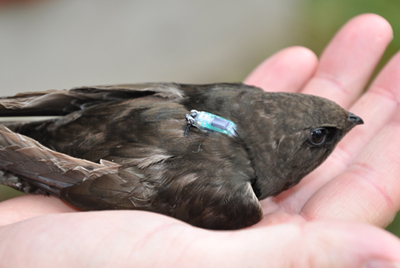 Swift mover. A swift equipped with a micro data logger that measures light.

In addition to the study on Öland, the researchers studied common swifts as they cross the Sahara in autumn and spring: their various flight routes and speed, how they find food, and how efficiently they use their energy.

The results show that common swifts, on their way from Sweden to Sub-Sahara and back, choose the most efficient route. Their migration routes across the Sahara are strongly linked to the access to food during different times of the year, and to the wind conditions that vary between spring and autumn in different areas.

“Common swifts choose to move with the wind. In the autumn, a central route across the Congo Basin is the most favourable; in spring, it is the longer western route through Liberia where, in addition to downwind, there is plenty of food”, says Susanne Åkesson.

The papers are part of a special themed issue of the journal, entitled Moving in a moving medium: new perspectives on flight compiled and edited by Steven J. Portugal and Emily L. C. Shepard.