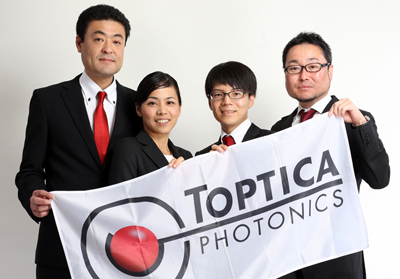 Due to the strategic importance of Japan in the high technology sector, Toptica Photonics has decided to open a dedicated office for sales, marketing and service in Japan. The company’s new Japanese base will be located in Fuchu-Tokyo and will commence operations on September 1st 2016.

Taro Saito, managing director of TOPTICA K.K., said, “Our team has already worked with Toptica products for almost ten years now. We are looking forward very much to cooperating with our Japanese customers even more closely in the near future.”

Thomas Renner, executive VP sales and marketing of Toptica Photonics, added, “Japan always had strategic importance for us due to the high density of high tech industries and academic research centers. We purchase many of our strategic components in Japan and also have close contacts to Japanese leading worldwide scientific and technology experts”.

Toptica is a developer and manufacturer of single frequency diode lasers and ultrafast fiber lasers. Key markets include quantum technologies, biophotonics and microscopy, industrial metrology and terahertz technologies. The company has more than 200 employees and its headquarters is located in Munich, Germany.

The company has a track record of developing, making and distributing diode and fiber lasers and laser systems for scientific and industrial applications. Sales and service are offered worldwide through Toptica Germany and its American subsidiary Toptica USA, as well as all through 14 distributors.

The company stated that “a key point of its philosophy is the close cooperation between development and research to meet our customers’ demanding requirements for sophisticated customized system solutions and their subsequent commercialization.”