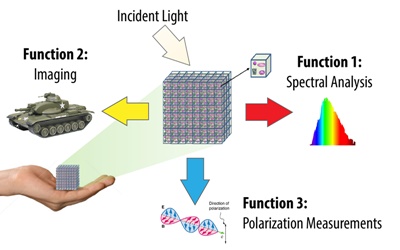 The US Defense Advanced Research Projects Agency (DARPA) is funding a new program that it hopes will dramatically reduce the size and weight of optical systems for military applications.

Focused on the development of new engineered optical materials - including two-dimensional metasurfaces, 3D volumetric optics and holograms - the aim of the planned “EXTREME optics and imaging” effort is to find ways to manipulate light in ways beyond the conventions of classical reflection and refraction, delivering optical systems the size of a sugar cube.

Proposers’ webcast
DARPA is organizing a webcast for interested parties that will take place September 1, with Predrag Milojkovic identified as the program manager. Originally from Yugoslavia, Milojkovic has worked at Northrop Grumman and the US Army Research Laboratory, as well as the optical interconnect start-up firm Applied Photonics. He said in a DARPA bulletin:

“EXTREME seeks to capitalize on this momentum by uniting these separate communities to revolutionize optics and imaging as we know it.”

A key program aim will be to demonstrate an optical system with engineered surfaces where control of light propagation is decoupled from a specific geometric shape, and can also be tuned.

“EXTREME also seeks to demonstrate a volumetric optical element the size of a sugar cube or larger that can perform a multitude of functions simultaneously in [the visible] and infrared bands, such as imaging, spectrum analysis, and polarization measurements, among others,” announced the agency, adding:

“If successful, EXTREME could introduce a new era in optics and imagers for national defense. EXTREME optical components would be lighter and smaller, enabling miniaturization of imaging systems for intelligence, surveillance, and reconnaissance (ISR) applications.”

Breaking with convention
The multifunctional nature of such devices would be expected to improve all sorts of imaging systems, including night-vision goggles, hyperspectral imagers, and infrared search-and-track kit, by reducing size and weight without compromising performance.

According to DARPA, such innovations will break through the limitations of conventional optics and optical design. The agency stated:

“One widely considered pillar of optical design, for example, is that imaging systems must be built from a series of complex and precisely manufactured optical elements arranged linearly.

“The result of such assumptions is that certain high-performance imagery devices inevitably end up being large and heavy, composed of dozens or more optical elements. DARPA’s EXTREME program aims to break from that well-worn paradigm.”

Ahead of the forthcoming webcast, DARPA is set to release an official broad area announcement (BAA) on the program, and is hoping to attract what it calls “non-traditional performers”, including small businesses and first-time contractors, to take part. Interested parties need to register for the proposers’ webcast in advance.

DARPA says that EXTREME will likely focus on three technical areas. Two will focus on engineered optical materials development and incorporation into relevant optical systems, while the third will be dedicated to modeling, design, and optimization work.

It expects the project to deliver at least an order of magnitude reduction in size, weight and power requirements, and/or revolutionary performance improvement over equivalent state-of-the-art systems.