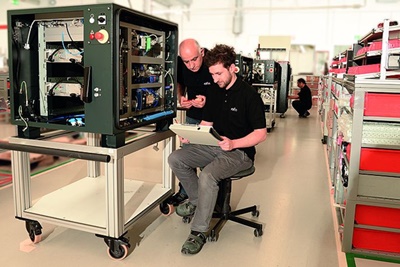 Rofin-Sinar says that it shipped 25 per cent more high-power fiber lasers in its latest financial quarter, compared with the same period last year.

However, at $125.9 million for the three months that ended June 30, the Nasdaq-listed industrial laser company’s overall sales were actually down 5 per cent on the prior year’s figure.

That was largely the result of a sharp decrease in sales of typically lower-power lasers for “micro” and marking applications. In contrast, sales of higher-power “macro” lasers increased slightly, while component sales rose 20 per cent to $24 million.

Margin uptick
While Rofin CEO Thomas Merk attributed some of the sales decline to the strengthening value of the US dollar against the euro, he was also able report a significant uptick in profit margins that kept the company’s net income level with the same period last year at $11.5 million.

“Thanks to our continuous efforts to further improve our cost structure and to streamline processes, we were able to reduce operating costs, despite material non-recurring expenses related to the proposed merger with Coherent,” said the CEO.

Another positive development in the latest quarter was robust demand from Europe (up 9 per cent), echoing recent comments from Trumpf suggesting that demand in France and Spain was at last starting to bounce back. That appeared to be offset by relative weakness in other regions, however. In particular, Rofin's Asia sales dropped 21 per cent from last year.

“We continue to see encouraging demand for our high-power fiber lasers, resulting in a 25 per cent year-over-year increase in units shipped,” added Merk. “We also saw more diversified demand for these lasers in the third quarter, with increased demand for higher power levels and for welding applications.”

2.5kW modules start to ship
One of the key technical developments that Rofin’s engineers have been working on is higher-power diode laser modules for those fiber lasers, which help to reduce their overall cost.

The company recently shipped the first of its fiber laser modules with the increased output of 2.5 kilowatts, and Rofin’s profit margins ought to improve further as those new modules start to feature more widely in its high-power fiber lasers.

Just last month Rofin revealed that it had expanded its fiber laser production capacity with an additional assembly line at its manufacturing facility in Hamburg. The more flexible laser production now possible there is set to adopt the latest 2.5 kW modules.

Despite the recent positive developments, the upheaval experienced over the past 12 months at Rofin – including an extended and very public boardroom battle to control the laser company before news of the Coherent deal emerged – appears to have taken some toll, with sales in the nine months to June 2016 down 8 per cent and net income down 30 per cent on the equivalent period in the prior fiscal year.

The planned merger with Coherent moved a step closer in late June when the Rofin stockholders present at a special meeting voted overwhelmingly in favor of the $942 million deal.

And although regulatory approval is still needed, as well as the $850 million debt financing package that Coherent is seeking to arrange in connection with the acquisition, Rofin's executives say that the deal should be completed by the end of the calendar year.